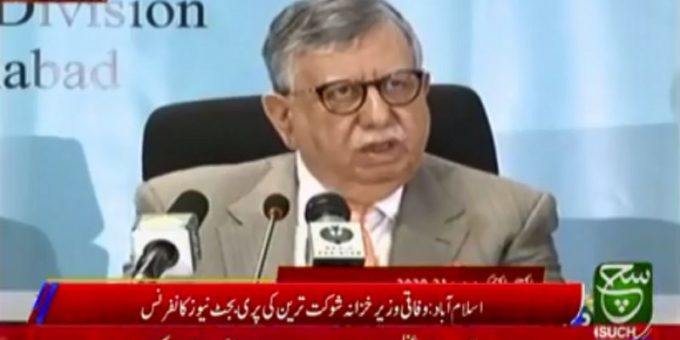 Speaking at his pre-budget 2021-22 press conference, he said the Covid-19 pandemic once again reared its ugly head in Feb and March 2021 and it was apprehended that it could be more dangerous than the previous two waves of the virus.

He said Prime Minister Imran Khan’s decision to go for smart lockdowns instead of a blanket lockdown to stem the virus spread was significant one in the government’s efforts to tackle the pandemic. The incumbent government’s decisions helped stabilize the national economy, he added.

While the government itself projected GDP growth rate at 2.1pc, the IMF and World Bank predicted even lower, he said.

“The government’s decisions such as giving incentives to manufacturing and textile industries as well as construction and agriculture sectors helped the economy recover,” he explained.

Tarin pointed out large-scale manufacturing (LSM) grew by 9pc, while the agriculture sector growth was recorded at 2.77pc against a target of 2.8pc.

The agriculture sector fared well despite the fact that cotton crop was damaged, he said and added other crops made up for the loss incurred due to the cotton crop damage. He acknowledged that prices of commodities are high and taking a heavy toll on the common man despite the government’s efforts to bring down inflation.

The finance minister said foreign remittances have touched an all time-high of $29 billion. ”

“The increase in remittances embodies overseas Pakistanis’ trust in the prime minister. Remittances are an angel from Almighty Allah,” he maintained, adding current account is in surplus due to the record rise in remittances.

He said the State Bank of Pakistan’s (SBP) reserves have risen to $16 billion.

The foreign minister said Pakistan’s overall debt stood at Rs38 trillion as of March 2021, out of which about Rs25 trillion is local debt while Rs12.5 tr foreign debt. The debt increased by Rs1.6 tr this year as compared to a Rs3.7 tr increase last year, he added.

He was of the view that the poor would greatly benefit if the economy steadily grows over next 10 to 20 years.

Taking aim at previous governments, Tarin said they showed artificial economic growth by taking loans, due to which the country’s economy always stood where it started after five years.

"What About Alliance With Sena?" Jitin Prasada Hits Back At Kapil Sibal