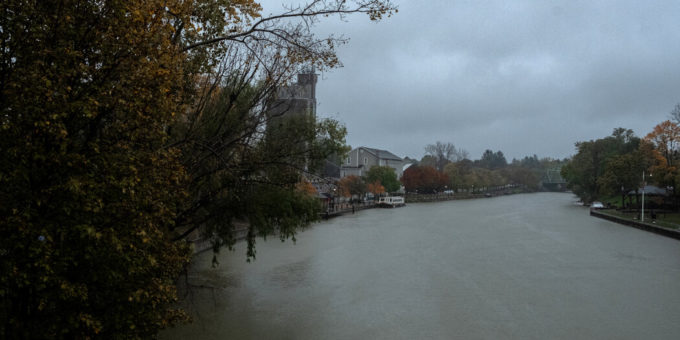 PITTSFORD, N.Y. — When students in the town of Pittsford, N.Y., an affluent suburb just outside Rochester, flowed back into schools this fall, something troubling emerged: a video of a white student brandishing a gun and making a racist threat.

“People be like, ‘Why do you carry a gun?’” the boy says in the short clip, pulling out the weapon. To kill Black people, he answered, using a racial slur.

For some parents and students, the video has laid bare what they say is a larger pattern of racist incidents in the largely white town, where local officials are now scrambling to address those concerns.

The Monroe County Sheriff’s Office said the teenager, who has been suspended and has not returned to school, was not an immediate danger, noting that the weapon was an air pistol and that the video was recorded months ago. But that assessment has done little to quell concerns of parents who say their children have endured racial taunts and other incidents with little consequences for their harassers.

“It’s not an isolated incident,” said Tharaha Thavakumar, who is of Sri Lankan descent and is the mother of a 14-year-old freshman in the school district. “It’s something that’s ingrained. And it isn’t going away.”

As the shock of the video continued to percolate, the town’s school district was buffeted by a pair of new allegations, accusing Pittsford students of taunting Black students from another high school — including making monkey noises and using a racial slur — during two soccer games in late September.

The Pittsford district said an investigation had found no evidence of such behavior, while officials from the rival high school — in nearby Greece, N.Y. — said their staff had found the claims credible.

The suggestion that Pittsford could be at the center of another racist incident prompted agonized responses from school leaders and officials in the town of about 30,000 people, where charming old houses sit on large lawns with white picket fences.

Pittsford’s main street is home to boutiques, salons and a 19th-century Town Hall, and its two high schools — among the best academically in the state — are surrounded by beautifully maintained sports fields. The median household income is more than $120,000, according to census figures.

Almost the entire adult population has a high school degree or better, in a town whose school system includes nine schools total and about 5,500 students.

In an interview, Michael Pero, the superintendent of Pittsford’s schools, stressed that the school district was grappling with the same forces as American society as a whole.

“I don’t think that anyone wants to have racism attached to their organization, their community, their schools,” he said. “But I also don’t want to sugarcoat this and say racist acts don’t happen in Pittsford, because they do. It’s a national issue, it’s something we’re all working through.”

In early November, the school district announced the hiring of an “equity and diversity coordinator,” with a wide-ranging mandate that includes increasing its tiny number of nonwhite teachers and administrators, as well as curriculum evaluation and supporting “restorative practices” in classrooms.

That comes on the heels of a series of “listening circles” for parents and students, held by two groups devoted to encouraging emotional health in children and helping communities heal in the aftermath of racist incidents.

But for upset parents like Ms. Thavakumar, such measures are far too meek to address more entrenched problems, including a nearly complete lack of Black teachers in the district. A 2016 investigation by WXXI, a local public radio station, found that just one of the district’s nearly 500 teachers was Black.

The district says diversity hiring has increased in recent years: As of this fall, it says the district has 13 teachers or administrators who identify as people of color — about 2.2 percent of the entire “certificated staff” — and 53 employees in that category districtwide.

The Pittsford schools are part of the Urban-Suburban program, a voluntary desegregation plan that brings students from the Rochester city school district to wealthier schools outside the city limits.

One of those students, Jaylen Wims, a senior who lives in Rochester, said he and other Black friends regularly endured “some sort of iffy or racist incident.” And while the gun video upset him, it didn’t surprise him.

“The magnitude of it made it an outlier, but in terms of having something occur?” he said. “No.”

In 2016, a series of fliers directing people to a white supremacist website were anonymously left on residents’ driveways in Pittsford and a neighboring town. Those fliers prompted strident denunciations from local officials, as well as antiracism rallies and the formation of a group of concerned local residents — PittsForward — committed to “addressing systemic and institutional racism.”

The next year, for the first time, Pittsford elected a Black man to the town board, Kevin Beckford, a Jamaican immigrant and former bank executive. Inspired to run by the racist fliers, he says he realized that “there’s some underlying issues that were really kept under the covers here” because of concerns about the town’s reputation as a desirable place to live and educate children.

One of the first Democrats elected to the town board after a decades-long domination by Republicans, Mr. Beckford, 56, says one telling moment in his first campaign came when he was petitioning to get on the ballot in 2016 and finding that few residents would open their doors. He altered his strategy, allowing a white campaign volunteer to knock and then introduce him.

“They would be friendly to me,” he said. “But it was just that notion of opening the door to a Black person.”

Much of the debate over racism has played out online, with social media posts from some members of the community who felt that accusations against students were false. Some Democrats also expressed concerns about racism in the run-up to local elections.

One of those candidates was Kendra Evans, a Democrat who fell short in an attempt to oust William A. Smith Jr., a Republican, as town supervisor. Ms. Evans, who is white and the mother of three adopted children — all of whom are people of color — says her children began “experiencing micro- and macro-aggressions back in elementary school.”

That includes Grace, her 15-year-old daughter, who is Haitian and recalls being called a racist vulgarity in fourth grade. And at a recent rally on the steps of Town Hall, Grace plead with Mr. Smith and Mr. Pero to do more to confront the problem.

“Racism isn’t new here,” she said, “and neither is us asking for help.”

Mr. Smith says that the recent incidents “are not at all representative of our town or its people,” noting a 2018 resolution he sponsored affirming Pittsford’s embrace of “residents from myriad national, ethnic and religious backgrounds.”

Mr. Smith, who has been town supervisor since 2014, also supported the creation of a volunteer “equity review board,” but in a video posted from last year on the PittsForward Facebook page, Mr. Smith struck a more skeptical tone.

“We live in this era of rigid cultural orthodoxy which frankly makes the medieval church look liberal by comparison,” Mr. Smith says.

He continues: “It has its own holy trinity: diversity, equity and inclusion. Which, from my perspective, diversity means everyone is supposed to look different and they are all supposed to think alike; an equity that’s based on massive inequities toward whole groups of people; and a concept of inclusion which means excommunication for those who do not recite the catechism syllable for syllable.”

Asked why he had made that statement, Mr. Smith said he was trying to express “what I consider to be the important distinction between what I and most people think of as diversity and equity and inclusion and what a small, extreme group of voices in our town mean by them.”

As the town board and school district look for answers, the recent episodes have also sparked a robust response from students in the district, who staged a walkout in late September to protest the school’s response to the incidents, organized by a student group called Diversify Pittsford.

Ameera Duarte, the group’s founder, said that the school district could take a major step by “listening to students of color and taking them seriously and then actually acting on what they say they are going to do.”

“They need to work on showing us that they actually care and want to help,” said Ms. Duarte, who is 16 and a junior at Pittsford Mendon High School.

State Senator Samra G. Brouk, a first-term Democrat who graduated from Pittsford Mendon in 2004, said that the reports of racist behavior were sadly familiar.

Senator Brouk, who is Black, said that she and her younger brothers — also past Pittsford students — had endured racial slurs while they were students there. “The difference now is our young people now have the language. They know there is support and they can be more vocal about experiences.”

Russia jails 5 people over coal mine disaster that killed 51

Commercial Decisions Would Be Protected: Finance Minister To Bankers
2019-12-28