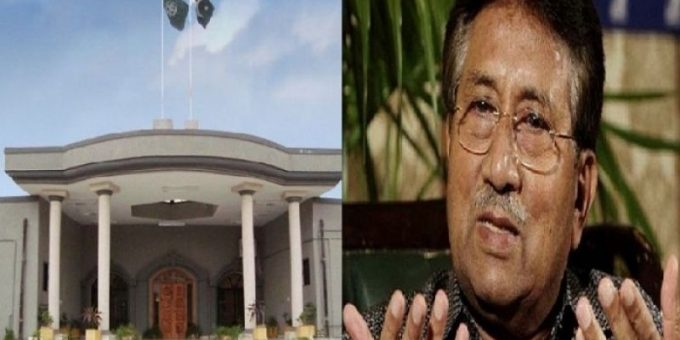 The Islamabad High Court (IHC) On Wednesday halted a special court from issuing a ruling in the high treason case against former president Pervez Musharraf.

The special court was set to announce the ruling in the treason case tomorrow. The IHC was hearing petitions filed by former president General (retd) Pervez Musharraf and the Pakistan Tehreek-e-Insaf government to postpone the announcement of the judgement.

However, upon a second summon to appear in court, the law secretary arrived in court at around 1:30pm. The court reprimanded the bureaucrat for being late, suggested reports.

What happened in the hearing of the case on Tuesday?

During Tuesday’s hearing, IHC directed the submission of the complete record of Special Court in the case while the Lahore High Court (LHC) admitted Musharraf’s plea for regular hearing.

Justice Minallah during the hearing observed that only paragraph 16 was important in the petition filed by the interior ministry.

Additional Attorney General (AAG) Sajid Ilyas Bhatti informed the bench about the details of the constitution of the prosecution team in 2013.

“Do you know the Supreme Court orders?” Justice Minallah asked the attorney general.

To this, the AAG replied that he had received the case file and orders to appear before the court just 30 minutes before.

The bench remarked that he was representing the federal government and should be aware of facts about the case.

“How can you proceed without complete information?” asked Justice Minallah. The bench asked the AAG to call in someone who knew facts about the case. “A representative from the Ministry of Law and Justice, who knows the case,” he added.

Pervez Musharraf’s lawyer tried to argue but the bench stopped him and remarked that the court will first hear the petition of the interior ministry. “Pervez Musharraf has been declared a proclaimed offender as per the law,” Justice Minallah.

Later the IHC summoned secretary law and justice to appear before the court in person with complete records and adjourned the hearing.

A Special Court had reserved its verdict in the high-treason case against the former president, fixed to be announced on November 28.

The Pakistan Muslim League-Nawaz (PML-N) government had filed the treason case against Musharraf over the president’s imposition of extra-constitutional emergency in November 2007.

Earlier this year, head of the prosecution, Mohammad Akram Sheikh, tendered his resignation. In his resignation letter sent to the interior secretary, Sheikh expressed his inability to proceed with the case after the imminent change of government at the centre.

Sheikh was appointed as the head of the prosecution in the case in November 2013, by the then-PML-N led government.

The former army chief was indicted in the case in March 2014 after he appeared before the court and rejected all charges.

On March 18, 2016, the former president left Pakistan for Dubai for medical treatment after his name was removed from the exit control list on the orders of the Supreme Court.

A few months later, the special court had declared him a proclaimed offender and ordered the confiscation of his property owing to his continuous inability to appear.

Later, his passport and identity card were also cancelled on orders of the apex court.

Watch: Dhaba Restaurant-Special Coorg Chicken Is All About Indulgence; Have You Tried It Yet?
2020-07-28