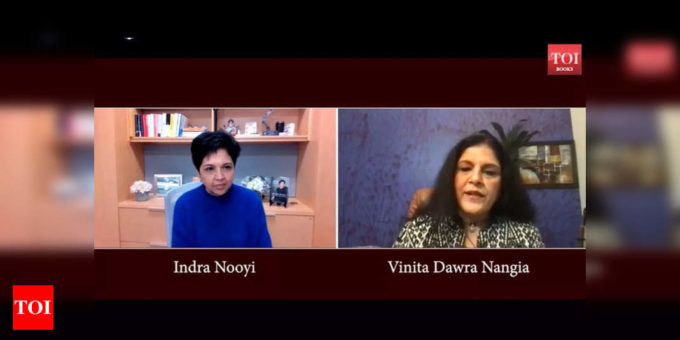 “One of the world’s most iconic CEOs who incredibly broke the barriers of gender and race, to emerge as the first woman of colour, an immigrant to run a Fortune 50 company- PepsiCo. In her book ‘My Life In Full’ which she calls not just her memoir but a framework of sharing her life lessons, Indra reflects on her extraordinary life and speaks honestly and openly of her vulnerabilities and strengths and of her abiding passion to the issue of caring, which Indra believes is fundamental to the growth of women,” Vinita Dawra Nangia, Executive Editor, Times of India said as she introduced Indra Nooyi, the former CEO of PepsiCo, in an exclusive interaction.

Hailing from a humble background, Indra Nooyi’s journey of emerging as one of the top women corporate leaders in the world of our times is an extraordinary story of grit and determination. She has now shared her story in her own words in a newly released memoir ‘My Life in Full’, published by Hachette India.

The first woman of colour to reach this zenith, Indra candidly spoke of her journey as a single woman of colour who went to the United States to realize all her dreams despite the biases. And she set an example not just for the country, but for the world by leading an organization as big as PepsiCo.

Hailing from a middle class family based in Tamil Nadu, she has always laid emphasis on her identity as a “South Indian Brahmin girl”, which highlights not her caste, but the extremely academics-centric approach that her family brought her up with. A family where education was considered as an investment in the future, Indra was brought up by an uneducated but inspiring mother and an extremely involved grandfather who centered his life around his grandchildren’s academic caliber. “I am a product of my childhood and upbringing, I am who I am because of the solid foundation that I had and I’m grateful for the Indian values. I grew up in a household where the belief was that the women should be educated as much as the men; a family which gave its girls some freedom, which was within a frame,” Indra shared about her childhood days with Vinita.

She further revealed, “I was a tomboy– I climbed trees, played cricket, even played in a women’s rock band, all of that was not put down. Nobody stopped me from doing those things but it was all under the watchful eyes of my parents.”

Crediting her mother for her solid foundation and upbringing, Indra added, “I always say my mother brought us up with one foot on the brake and one on the accelerator. The brake was the society and what women were expected to do, which my mother had to live under. The accelerator was that she is a brilliant woman and had she been allowed to go to college she would have been a CEO, without a doubt! But, you know, in those days that facility wasn’t available to women and our family could only afford to send the boys to college, so my mother missed out. So she lived her life through her daughters. My father and grandfather urged her on, to have that foot on the accelerator. I grew up with this duality and in many ways I think I am a product of that duality. It all helped me think about what I can do in my life and where the limits are put.”

Speaking of America and her status as an immigrant in the country, Indra spoke about her struggles as a woman, and a coloured individual who had to be subjected to multiple biases and overcome them to prove her mettle. Hailing from a time when women were scarce in the financial sector, she talked about the prerequisite of having to establish credibility. “As a woman you had to come with 25-50% more preparation as compared to men,” she revealed. Being a “tom-boy”, she had to face challenges vis-à-vis grooming and dressing that are equally important factors at the workplace. Adding to that, her nationality and colour, she had to go through the scanner of judgements and stereotypes to establish herself as worthy. However, she chose to be an immigrant in the United States and believes that albeit all barriers that stood in her way, “For a person of colour, an immigrant, to come and be the CEO of an iconic company is something that can happen only in America… I am a great, living example of the wonderful American Dream- the American experience.”

Talking about other things that were inspiring, to say the least, Indra also shared her mantra for success for young women and men and talked about her plans post retirement.

Praising Indra for her memoir, Vinita pointed out, “When you read about the life of another person, that’s when you realise why it is so important to read memoirs and autobiographies. You realise how very often in life you are nudged by little things that happen and you realise later how everything was meant to lead you to this purpose and where you are today. As you rightly say, `You have to be aware and keep listening to the voices’ that are happening around.” To this Indra added on a concluding note, “And put your hand up for the unusual assignment and see where it takes you! You only get noticed when you do the difficult work.”

5 Best Chutney Options To Spruce Up The Meal