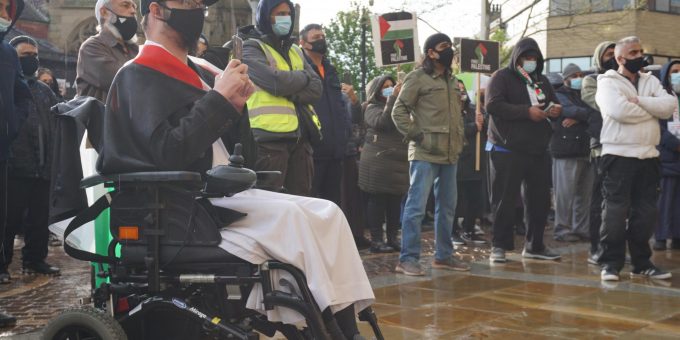 Hundreds of demonstrators turned out at a hastily arranged Pro-Palestine rally in Blackburn Town Centre tonight.

The protesters called for the British Government to condemn the actions of the Israeli Defence Force and to highlight the human rights abuses taking place in country.

The event was supported by the Lancashire Council of Mosques (LCM) and local volunteers who were only given permission to host the event earlier today. Crowds gathered on the steps of Blackburn Town Hall from 6pm.

Speakers on the day included Kate Hollern MP, Councillor Mohammed Khan, leader of Blackburn with Darwen Council and Chair of LCM Maulana Rafiq Sufi. Also speaking were pro-Palestinian activists and volunteers who have campaigned for many years to highlight the plight of the Palestinians.

Speeches focussed on the events of the past few days and there were also calls for peace and understanding. Speakers were keen to stress that the demonstration was not against any religion or people but against the tactics and actions of the Israeli Defence Force and Government.

Prayers were also said for everyone who has died in the recent violence.

The protest ended at 7pm and people were asked to disperse quickly and not to stay in the town centre.

The latest violence in Israel began after Israeli forces stormed the Al-Aqsa mosque compound in Jeruselum wounding scores of people.

Israeli police then clashed with Palestinian protesters outside Jerusalem’s Old City during the holiest night of Ramadan (Sunday) in a show of force. The brutal crackdown came after police had blocked busloads of men, women and children headed to Jerusalem for prayer at Islam’s third holiest site.

Further scenes of violence overnight Monday which saw twenty people including nine children killed in the Gaza Strip according to Palestinian health officials. At least seven members of one family, including three children, were killed in an explosion in northern Gaza.

Israel said two women were killed by rockets fired from Gaza that hit their homes in the southern city of Ashkelon – the first Israeli deaths in the current violence.

At least 10 other Israelis have been wounded since Monday evening.

Check Out The Teaser Of Upcoming Drama Serial “Dor”

Margot Robbie’s Birds Of Prey Teaser Leaked Online As She Takes a Dig At Joker, Pennywise
2019-09-07