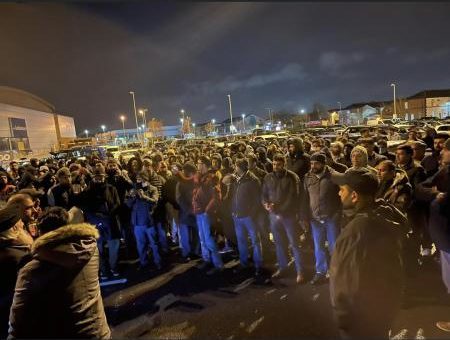 TAXI drivers staged a 100 strong gathering to demand action to improve their safety after a driver was left with serious facial injuries in a brutal knife attack.

Taxi drivers left their vehicles to gather in the town centre on Saturday – one of their busiest days – in solidarity with the driver and to call for more action to safeguard drivers.

Detectives say that at around 4.15am on Saturday, an armed man threatened a taxi driver outside Natwest bank on The Rock before attacking him with a knife.

Now there is talk of strike action if more is not done to keep taxi drivers safe.

Raja Naveed, Vice-Chairman of the Bury Private Hire Drivers’ Association said the driver had been left with “life-changing injuries”.

Taxi drivers gathered on Cecil Street car park in ‘solidarity’ with the victim to say prayers for his ‘speedy recovery’.

Mr Naveed said: “Right now drivers are scared out of their minds and rightfully so, because this could happen to any one of them at any time.

“So many drivers don’t want to go out and have told me they will go on strike if nothing is done by the police.

“Not only that, but I imagine a lot of people don’t want to take taxis at the moment, because this is as much a threat to the public as it is to us, as long as the individual who did this is still at large.

“This person is still out there with a weapon because the police can’t identify him.

“I want drivers and their families to feel safe and to know that there is someone out there looking out for them.

Mr Naveed added: “I have spoken to the victim and he has had life-changing injuries, a young man who has been literally scared for life.

“The whole driving community is behind them and we will stand shoulder to shoulder with them and will stand together whenever this happens to one of our own.

“We will work with police very closely to get to the bottom of this.”

Mr Daly said: “We are going to address the concerns of our drivers and I want to assure them and any other members of the public who have been affected by this that the police are doing all they can to address the perpetrator.

“I know they are following every line of inquiry and are taking steps to ensure their safety.

“We’re working with drivers who have suggested several more ideas as to what needs to be done.”

He said that the council is working with drivers to improve safety and deter would-be attackers.

“My deepest sympathies go out to the victim and all the drivers of the borough who have every right to go about their work safely.”

Sensex, Nifty Likely To Remain Volatile Next Week In Run Up To Budget, Say Analyst
2020-01-25