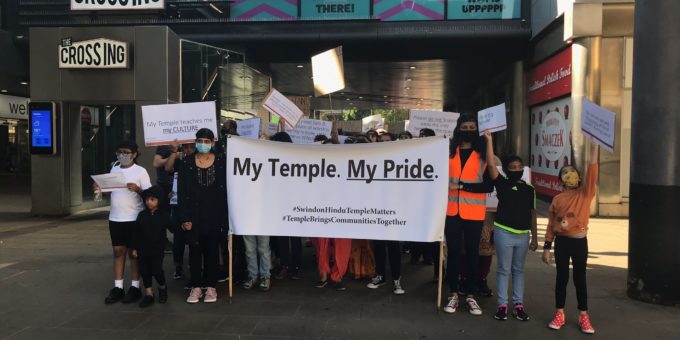 HUNDREDS staged a peace march in the town centre to show their solidarity with the Hindu community after a fifth break-in at the Swindon temple.

The community gathered in Wharf Green yesterday morning with banners and signs which read “My temple teaches my culture”, “please do not snatch away my only temple in the town”, “we stand together”, and “catch those who vandalised my temple”.

Organisers asked that only one person per family attend the march in a bid to maintain order.

Ayan Sengupta, who lives near Greenbridge, said: “It’s not just a temple, I wouldn’t consider myself as a very religious person, but the temple is very important to me because it’s a place where I can interact with the entire community, like-minded people. It’s a social and a cultural aspect.

“We meet together, it’s a place where we can share our culture and our own language. It broke my heart; it has broken in for five times and that’s not fair.”

The 36-year-old dad moved to Swindon just a couple of months ago.

He added: “The temple just reopened, and probably within a week or so, it was being vandalised, it’s not just a place to worship, it’s a place where you all come together as a community and that has been taken away from us and that is very painful.

“We are all angry but look at the way we are peacefully protesting.”

The building in Cheney Manor Industrial Estate has acted as a place of worship and community events for the past five years.

But the vandalism of a sacred altar and the theft of thousands of pounds has shocked an entire community.

The majority of attendees wore a black headband as a symbol of their sadness.

“The community was deeply hurt because of this vandalism,” Ankur Patel, one of the organisers, said. “We are demonstrating with this black cloth that we are deeply hurt and sad and that we need support from all the community.

“Our request to the borough council and all the Swindon authorities is very simple – please help us restore the Hindu temple, it is not only a place of worship, it’s a place where all the charity work happens.”

One of the priests Priya Mane said she was devastated after seeing the damage caused by vandals.

She said: “We do a lot of charities for homeless people, and the NHS workers. It’s not just a Hindu community temple, it’s a charity hub as well. We raised hundreds of pounds for the local community.

“I was in tears. I just couldn’t see my idol lying on the floor. That’s really disgusting, and I’m utterly devastated.

“Today (Sunday) is the last day of our festival, which is the Ganesha festival, and the Ganesha picture was on the floor when they vandalised, and I am really angry about that.

“Because of this temple, we have all got together, we don’t have any family here, so this is like my family, this is a gathering place. We don’t have a temple now”

She added: “I don’t feel safe, because if the temple can be vandalised… who knows.”

Devotees are now calling for a safer and more secure religious hub.

Suresh Gattapur said: “We want a safe place, we need CCTV cameras, because obviously you can’t have police officers patrol 24/7, but at least we need proper security measures in place.”

South Swindon MP Robert Buckland attended the march and told the Adver: “That’s just something terrible, and it’s good to see positiveness and togetherness. The whole community has come together because we think that an attack on the Hindu Temple, is an attack on all of us.”

“The Hindu community is such a huge part of our town, we are a diverse, interesting, wonderful and rich place to live. Anything like this has to be responded to by us coming together.”

Leader of Swindon Labour group, Coun Jim Grant said: “The Labour party is here to support in solidarity with the Hindu community over the situation at the temple and in our submission to the local plan that’s coming up, we are going to try to make provision for the temple situation in Swindon.”

The Kapil Sharma Show: Ayesha Jhulka reveals Akshay Kumar asked her to put soda on her face and eyes
2021-10-13