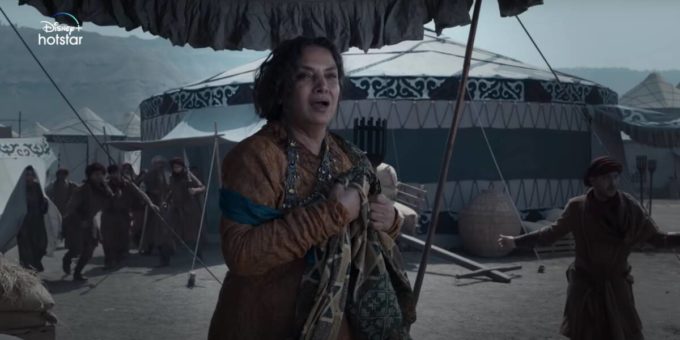 The trailer of the Hotstar Specials series, The Empire, set in the Mughal era, has received the right kind of attention from Bollywood celebrities as well as from the audience. The historic drama features Kunal Kapoor as Mughal emperor Babar, Shabana Azmi as Babar’s grandmother Esan Daulat and Dino Morea as Babar’s nemesis Shaybani Khan. Rahul Dev and Drashti Dhami also play a pivotal role in the series.

Shabana Azmi, who is playing a historical character for the first time, is excited to be a part of the eight-episode series. “I loved the part as it had so many layers and I love how it gave me the choice to make choices,” the veteran actor said during a press conference.

“I always wanted to play a historic character. Begum Esan Daulat is such an interesting woman. She lives with a secret which you will get to know in my last scene. Generally, it is a man who is a kingmaker, but I think it is for the first time that a woman is handling the mechanisation of the entire empire. Also, I love Urdu language and I was getting to speak it so I hopped on the opportunity,” said the 70-year-old actor while sharing why did she decide to sign the show.

Shabana Azmi and Kunal Kapoor in a still from The Empire.

Adding to it, Azmi said, “All the women here have really strong characters and this is something that we need to see more. We need to give far more visibility to our female characters.”

Though Azmi has been a part of the Hindi film industry for over four decades now, she was worried about her dialogue delivery in The Empire since she believes whenever an actor gets to do a historical character, he/she enters the Mughal-e-Azam mode.

“In my prep, the basic challenge was that I should learn the dialogue and yet it should not sound like I am pontificating. There is a tendency when you play a historical character that you automatically put on that Mughal-e-Azam voice because you don’t have much reference point. So, you have to say the dialogues in a way that you retain the ‘adaa’ but you don’t lose the emotion in the effort to say the dialogue. That for me was important. We also worked a lot on the costume and decided to keep it tribal and not go for all diamonds and that regal look,” the actor said as she explained how she prepared for the role of Ehsan Daulat.

The magnum opus is directed by Mitakshara Kumar, who has worked as an associate director on Sanjay Leela Bhansali’s period dramas Bajirao Mastani and Padmaavat. She credited her knowledge of the genre to Bhansali and shared she showed some parts of the series to the filmmaker. “I did show a few parts of the series to Sanjay Leela Bhansali. His reaction was what I expected. He is my teacher, I showed him to not get appreciation but to know what I have done wrong,” Mitakshara said while answering a question by the indianexpress.com.

Mitakshara also addressed how The Empire is being called as India’s answer to Game of Thrones. “I hadn’t seen Game of Thrones when I was making The Empire. I don’t agree with the comparisons, just because you see two people fighting, you compare it. But, if people are still comparing it, I will take it as a compliment.”

The Empire is slated to release on Disney Plus Hotstar on August 27.

Opinion | Afghanistan’s Fall, Seen By a Veteran Who Fought There

Naomi Osaka In Tears During Press Conference At Cincinnati Masters

Pictures: Ankita Lokhande and her girl gang at her bachelorette party
2021-11-17