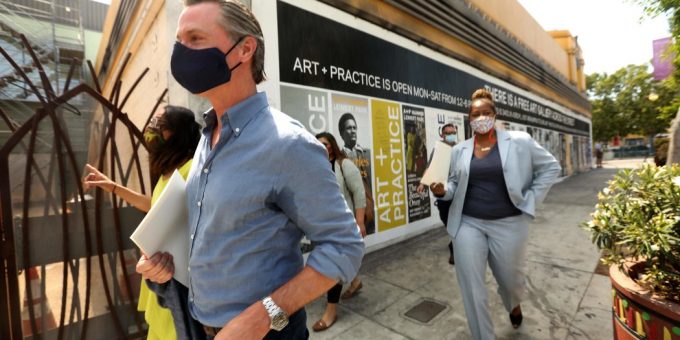 (Here’s the sign-up, if you don’t already get California Today by email.)

Demonstrators gathered in cities across the state for a ninth night to protest racism and police brutality on the same day that officials in Minnesota announced new charges for the Minneapolis officers in the death of George Floyd.

In Oakland, protesters defied a curfew they said was intended to silence them, while in Los Angeles, a weekly Black Lives Matter gathering swelled to thousands.

[Read about the new charges here.]

All this makes it feel strange to think that just about a week ago, Californians were carefully tracking a complicated, fraught process for reopening restaurants, stores, salons and other businesses that make up the lifeblood of the state’s economy.

And not long before that, as the realities of the pandemic became more clear, pollsters with the nonprofit Public Policy Institute of California were taking the public’s temperature on the state and federal government’s response to the crisis in the institute’s most recent statewide survey.

Mark Baldassare, the organization’s president and chief executive, told me that the results show the depth of the psychological impact of the crisis; almost half of Californians say the worst is yet to come in the pandemic — but that number is much higher, 69 percent, among African-Americans, who have been disproportionately hurt both by the virus itself and economically in the crisis.

Still, almost six in 10 Californians are more worried about the state reopening too quickly, rather than not quickly enough.

“People continue to put their faith in state leadership around the Covid crisis,” Mr. Baldassare said.

That extends to Gov. Gavin Newsom, whose approval rating increased to 65 percent of adults from 53 percent in February.

President Trump’s approval rating, on the other hand, has stayed the same, 35 percent among adults, from February to May. And the ratings have been consistently divided along party lines.

That his handling of the coronavirus crisis hasn’t affected his ratings at all, Mr. Baldassare said, suggests that political polarization is deeply rooted.

“You could look at Donald Trump’s ratings before the impeachment,” he said. “There is nothing to date that has moved his base.”

Mr. Newsom, on the other hand, could be benefiting from a “rally around the flag,” phenomenon — but it’s a boost that may not last.

“The things that tend to make people disapprove of their governor is what our governor will be dealing with in the next few months,” Mr. Baldassare said. “State budget problems.”

And there are going to be a lot of them. Right now, the state’s $54.3 billion anticipated shortfall still feels abstract, Mr. Baldassare said. But as cuts to programs and services become real, Californians will almost certainly lay some blame at Mr. Newsom’s feet.

The survey showed that Californians have a dim view of both the state and national economies right now, amid huge job losses, Mr. Baldassare said.

But he added that one reason the protests over the past week had gained such broad, multicultural support is that many Californians across race and geography are frustrated with economic inequality.

That, coupled with what the survey found was overwhelming support for the state’s vote-by-mail expansion ahead of November, could point to a major mobilization of voters inspired by the protests to get more involved with local or state races.

“It will be people who are very upset about the status quo getting the chance to have their voice heard not just about the president or Congress,” Mr. Baldassare said.

Here’s what else to know

We often link to sites that limit access for nonsubscribers. We appreciate your reading Times coverage, but we also encourage you to support local news if you can.

For more context: Last year, Vallejo police drew outrage after shooting and killing Willie McCoy, who, it appeared in video, had been asleep in a Taco Bell drive-through. [The New York Times]

Read about the Hmong community in Fresno. [The New York Times]

Global Pride will be online, organizers have announced, as will San Francisco Pride and San Diego Pride.

But as has been broadly noted over the past week, Pride celebrations commemorate Stonewall, an uprising against discrimination led by people of color like Marsha P. Johnson, the black transgender advocate and performer.

And so the nonprofit that produces the LA Pride Parade announced on Wednesday that it would once again host an in-person event — but this one would be a protest march in solidarity with the black community. It’ll be on Sunday, June 14.

“It is our moral imperative to honor the legacy of Marsha P. Johnson and Sylvia Rivera, who bravely led the Stonewall uprising, by standing in solidarity with the Black community against systemic racism,” said Estevan Montemayor, president of the board of directors for the organization, Christopher Street West, in a statement.

The organization has asked participants to wear face coverings.

Jill Cowan grew up in Orange County, went to school at U.C. Berkeley and has reported all over the state, including the Bay Area, Bakersfield and Los Angeles — but she always wants to see more. Follow along here or on Twitter.

Sudan calls on UN to urge Ethiopia, Egypt not to take unilateral measures on Renaissance Dam