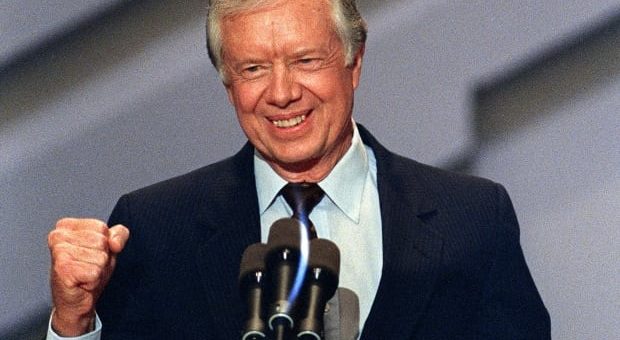 A viral post from the Historical Society of Ottawa is illuminating a part of the region’s past that few in the area — or the country — have ever heard before.

Ben Weiss, co-ordinator of the society’s Facebook page and speaker series, recently posted about the world’s first nuclear reactor meltdown. And while Chornobyl, Fukushima and Three Mile Island often come to mind when nuclear incidents are brought up, this one happened less than 200 kilometres from the Canadian capital.

Even more interesting is catastrophe was averted, in part, with help from future U.S. president Jimmy Carter.

In December 1952, an experimental nuclear reactor in Chalk River, Ont., about 180 kilometres northwest of Ottawa, “experienced mechanical problems and operator error that led to overheating fuel rods and significant damage to the NRX reactor core,” according to a Government of Canada page.

That page goes on to say it was the world’s first nuclear reactor incident, but little else about what actually happened.

Using details from an article written by journalist and author Arthur Milnes, Weiss had posted about the Chalk River meltdown last Tuesday night.

“The next morning … I took a look. And all of a sudden, I realize this story has been on fire all night. I assumed people slept at night,” he said. “But it was very extraordinary. And it resonated with people.”

The historical society’s posts generally garner views in the thousands, Weiss said, but this has been “by far” the most-viewed post he’s ever put up at close to one million views — and that’s just on Facebook.

Milnes, who also published a book about Carter and his wife Rosalynn, said the former U.S. president takes a lot of pride in his involvement in the Chalk River event.

“It’s not a topic that most American journalists or anything had much interest in. So when President Carter found out that I wanted to talk about Chalk River, he was just really eager,” Milnes said.

“He got to the point where I ran out of questions.”

The partial meltdown at the facility brought explosions and it was flooded with hundreds of thousands of gallons of water, prompting the Canadian government to turn to its neighbour to the south for assistance.

Carter, a U.S. Navy lieutenant who was working on a nuclear submarine project in Schenectady, N.Y., at the time, was called upon to head north.

“We had the dubious distinction of having one of the first nuclear accidents. And the Americans, obviously, were very interested and … worried,” Milnes said.

Carter led a team of men on the mission, which required the reactor to be shut down, taken apart and replaced. An exact replica of the reactor was built at a playground nearby, with Carter and his troops practising taking it apart and putting it back together as quickly as possible.

When it came time to work on the actual reactor, the men worked in shifts of 90 seconds — the high radioactivity made anything longer extremely dangerous.

“By today’s standards, there’s no way that would have happened,” Milnes said.

“In [Carter’s] case, at least, he was lowered into the building … with his wrench, and he had to run over to the reactor casing and he had one screw to turn. That was all the time he had. And then, boom, back up.”

“He talks about [it] today. He had radioactive urine for many weeks afterwards. They were tested continuously,” he said. “He was told it was likely that he would never have children.”

After the story was shared so widely, Weiss said people across Canada and North America were reaching out, commenting and following the historical society’s Facebook page.

So why does he think it caught so many people’s attention?

“Jimmy Carter was the president who saved the day when he was a younger man; it definitely, definitely resonated,” Weiss said.

“So they practise everything. And then, as they were actually going in, risking their lives … they were also keeping track of what they were doing on the replica in the playground, as well.

“That’s a story we can all understand.”

Live: Afraz goal brings Pakistan back in the tie