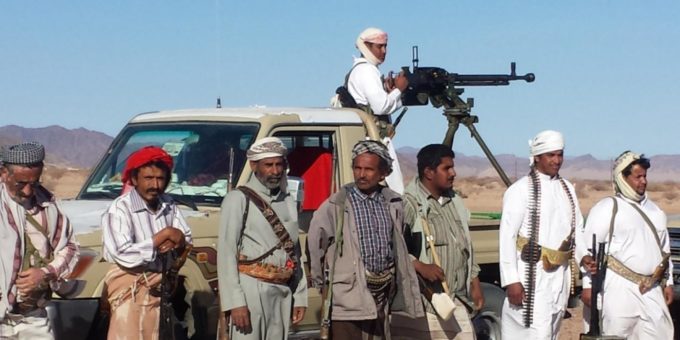 AL-MUKALLA: At least 11 Yemeni government troops were killed and 17 others wounded on Thursday when an explosion caused by a Houthi missile or drone strike rocked their military base in the southern province of Shabwa, local officials and media reports said.

Soldiers from the Giants Brigades were regrouping inside a military base in the Markha Al-Soufla district when a large explosion ripped through the base, a local government official told Arab News.

“The Giants Brigades were getting ready to advance toward other areas in Markha Al-Soufla to defend them against Houthi incursions,” the official, who asked to remain anonymous, said.

Local media reports said the explosion was caused by a ballistic missile fired by the Houthis, but other sources said that an explosives-rigged, Houthi-controlled drone attacked the base.

On Tuesday night, two ballistic missiles fired by the Houthis landed inside Ataq airport in the provincial capital of Shabwa, shortly after the Giants Brigades took charge of the airport from local military units.

Yemeni military analyst Khaled Al-Nasi said that the military commanders were expecting Houthi attacks on the new troops in Shabwa and had taken precautionary measures.

“This is the nature of war, but this (Houthi attack) will not affect the work of the Giants’ forces and their mission in Shabwa,” he said on Twitter.

Hundreds of troops from the Joint Forces, an umbrella term for three major military units including the Giants Brigades, were relocated from government-controlled areas in Taiz and Hodeidah to the southern province of Shabwa to reinforce government troops battling the Houthis.

Local military officials say the Giant Brigades forces in Shabwa will take part in an offensive to expel the Houthis from Bayhan, Ain and Ouselan districts.

In Riyadh, the Arab coalition said it had carried out 22 air raids in support of government troops in the central province of Marib over the past 24 hours, killing 150 Houthis and destroying 15 military vehicles.

Hundreds of Houthi fighters have been killed by coalition airstrikes in the provinces of Marib, Jouf, and Hodeidah in the past two months as the coalition intensified its attacks to prevent the Houthis from seizing control of new areas and to pave the way for government troops to advance.

Covid Live Updates: F.D.A. Is Said to Be Near Allowing Boosters for 12- to 15-Year-Olds

Has the time arrived for Malayalam superstars to let go of mass movies?