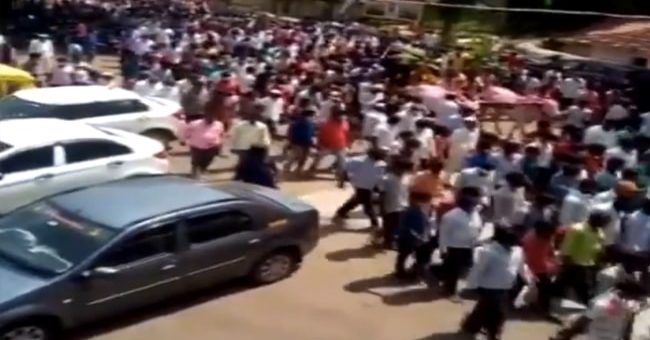 Hundreds of people participated in the funeral of the horse in the Maradimath area of Belagavi.

Hundreds of people violated Covid restrictions to attend the funeral of a horse belonging to a local religious organisation in Karnataka’s Belagavi district on Sunday. The large gathering has forced district officials to temporarily seal the village and carry out tests to check for new cases.

A police case has also been filed in relation with the incident.

Visuals shared by news agency ANI showed people walking shoulder-to-shoulder to participate in the funeral of the horse in the Maradimath area of Belagavi. Many were also without face masks.

#WATCH Hundreds of people were seen at the funeral of a horse in the Maradimath area of Belagavi, yesterday, in violation of current COVID19 restrictions in force in Karnataka pic.twitter.com/O3tdIUNaBN

“A horse of a local religious organisation in Mastmaradi village died in the morning, following which people of the village took out a funeral procession and cremated the horse. The village has been sealed and an FIR has ben registered. We are conducting RT-PCR tests. This village will remain sealed for next 14 days. Nobody is allowed to come in or go out,” a police officer told NDTV.

Karnataka – which has been battling a surge in cases in the second Covid wave – is currently under a lockdown that will remain in force till June 7.

The southern state has reported 25,000 virus-related deaths so far and the number of active cases is around 4.73 lakh.

The total number of COVID-19 cases reported so far is over 24 lakh.

The boy-girl dilemma: What is gender disappointment and how to deal with it
2020-01-31