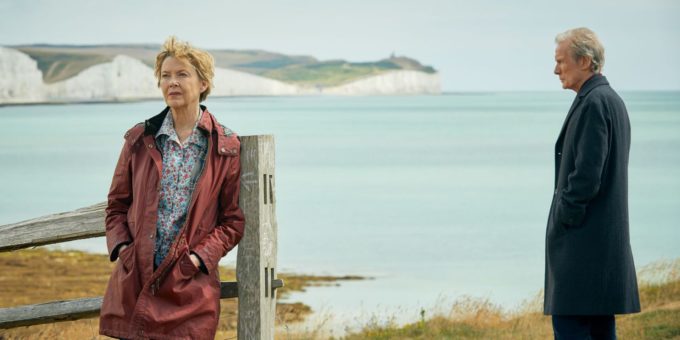 Okay I am holding back  here. I would have gone  with a 5-star rating for this excruciatingly beautiful portrait  of  a marriage falling apart  But all my editors feel  I am too generous with the ratings….So here  I am,  practising  the ‘less is  more’ ideology for a change.

This is what Hope Gap does. It is extremely austere in reifying the emotions that we can see swell up in the  characters as they face a situation they never expected.  After 30 years  of a comfortable marriage, who quits? It sounds ridiculous to even the man, played with tremendous restrain and dignity by Bill Nighy.

For years Edward has been taking in his wife’s bantering and bullying, taunting and temper tantrums. “Why didn’t you tell her that you hated her attitude?” their shocked son Jamie asks his father as the patriarch prepares to leave home one not so fine Sunday morning while  matriarch  Grace attends church,clueless that her husband’s  plans to  change her life, THEIR life, so suddenly at a time when she dreamt of only the calmness of  a shared retirement.
It’s a cruel baffling scenario, as seen through the eyes of  the son. Josh O’Connor as the son who has his own  problems away from home  in London to deal with, fills the film with a nurturing empathy. In one of the film many memorable sequences (almost  every  moment is unforgettable) Jamie tells his  only two friends how  his parents would pick him from both the  sides and swing him midair while walking together . As he tells this, his voice cracks. The tears flow.

Hope Gap is not only  about the tears, though.  There is tremendous warmth and laughter  in the way the nuclear family  deals with this  unexpected crisis. The redoubtable Annette Bening as the abandoned wife is her usual magnificent yet understated  self. As  the moody hot-tempered  Grace she  never realizes what  irrevocable damage  she has been causing to her marriage  over decades. And when the wages of her  insensitivity weigh in on her marriage she is completely ill-prepared for the storm.

I loved  the sequence in the  lawyer’s office where she walks in with her new pet dog named Edward after her deserter husband and then, as expected, creates a scene,  finally walking out on the lawyer, her husband and their divorce settlement accusing the lawyer of  behaving like Nelson Mandela(!!).

For me the crux  of the film are the  mother-son sequences. Bening and  O’Connor play majestically  against one  another, creating the kind of umbilical tension that  most children of warring parents  would recognize. At one point Jamie tells his mother to let me him know if she’s planning to end her life after the marital abandonment. No, it’s  not a joke shared between mother and son. It is a statement on the enormity of the grief that Jamie’s father has left behind. And yet you can’t hate the man for finding love elsewhere.

Hope Gap has no room or patience for hatred. It’s  a gently undulating beautifully shot saga,  moving like the waves  that  tug and prod the rocks of Sussex where the muted drama is located. The film ends on a note of hope. Yes, life goes on, no matter what. But  sometimes the wounds are too deep to heal The  film reminds  us of those hurts that never fade . It’s  not  a film about  love and romance. It’s about the end  of  love and  marriage. But it’s not the end.

Families of inmates kept in the dark amid COVID-19 outbreak at B.C. prison

Coronavirus: Why are Australia’s remote Aboriginal communities at risk?
2020-03-20