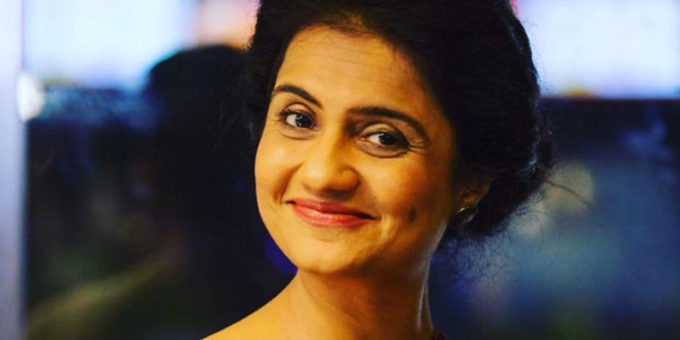 Amruta Subhash brings as much life to a conversation off-screen as she does to her characters. As she speaks to indianexpress.com about the success of Netflix film Choked, Amruta tells many stories.

What does the success of Choked mean to you?

Choked was a distressing experience for me because, after many years, I did something which had a comic tone. Also, Tai is very complex. She has many layers. You cannot decide if she is genuine or cunning. I love playing such characters and what’s interesting is that this is my third venture with Anurag. Anurag wouldn’t stop laughing and I kept improvising.

He loves when one improvises, so he gives you space for it. I would keep adding lines on my own and Anurag wouldn’t say cut. And the whole set would break into laughter once he said cut. It now feels good that the audience is also feeling what we felt while making the show. I would like to share this one thing with you.

There’s a scene when I shout out to Sarita (Saiyami Kher) and say, “Char baje call karti hun,” and next I say, “Ae gas band kar!” When this scene was being shot, the first cut happened when I said the first line, and then Anurag told me, “Just switch to something else now. Say something completely unexpected.” So, then I did my last take and added the “Gas band kardo” line, and everybody started laughing.

After this, I called up Nawazuddin Siddiqui and told him that this scene reminded me of one of his sequences in Raman Raghav 2.0. And when even people wrote about this similarity, it felt so good. When your experience of shooting something resonates with the audience, it’s so much fun, right?

It is also a testament to an actor’s craft.

For an actor, nothing’s bigger than that. We are just trying to communicate and if the audience so clearly absorbs your nuance, then nothing like it. I remember that when I was shooting Gully Boy, Ranveer Singh and I were having a conversation, and I told him that the first word that came to my mind after watching Khilji was “unloved”. He was surprised because that was the first word he wrote while preparing for the role. That’s where the fun is.

Anurag, in an interview, said he didn’t like repeating his actors. Your partnership with him has stood for three projects so far. How has your equation with him evolved since Raman Raghav 2.0?

Anurag keeps telling me the same, “It’s enough now. I won’t cast you again.” But I feel so far we have only done something new. Maybe that’s why he has repeated me. During Choked, he told me I was ‘Lady Nawaz.’ He has repeated Nawaz a lot. So, I am fortunate. Perhaps, he is not bored of me yet! And I hope it remains so because he tells me after every project, “Ab khatam.” Anurag pushes you out of your comfort zone, but he doesn’t leave you alone there. Whatever you have liked in my performance in Choked, it’s all his.

This didn’t happen during Raman Raghav and Sacred Games, but while making Choked, he would get really excited. He is a fantastic actor so he would show me how to do it and he would be so good in it that I wished he had played my character! So, there’s one instance where I have copied him. The one where I tell Sushant (Roshan Mathew), “Daal mat bana. Mai lekar aarahi hun tere liye.” And then the plaster from the roof falls in the daal, and I give a reaction, which Anurag had shown me how to perform.

My husband told me, “This expression is not yours!” So, Anurag has given me such unique experiences. The day we stop giving each other new experiences, we will stop working with each other. But there are a lot of things we can still explore with each other.

From Razia (Gully Boy), Kusum Devi (Sacred Games) to Sharvari Tai of Choked, it’s commendable how you, building on fabulous writing, have lent individuality to characters that could easily be bracketed as “supporting characters”. It’s an achievement that your character in Gully Boy got popular by her name and not just as “Murad’s mother.” And you were told not to sign the film because the role was of the hero’s mother.

In Gully Boy, not only me but every character, including Moen or MC Sher, is known by their names. This is what Zoya Akhtar did. Even when I signed the role, people asked me, “Why did you do a mother’s role?” I told them, “It’s not a mother’s role but Razia’s.” It’s when people watched the film, they understood why I did it. Razia is a woman who tells her husband, “Did you ever know how to touch me?” That startled me and also appealed to me about her.

For Tai, I trusted Anurag Kashyap. I trust him so much that if he is asking me to do a role, I don’t look at the script. I have this connection with Zoya also. This stereotyping of side characters is taking a back seat now. In the Marathi film Astu for which I got a National Award, my role comes after the interval and my screen time is a mere 10 minutes, but I knew it was a fantastic character. Actors are now realising that just because you are in the film for the whole duration doesn’t mean it would be good for you.

Naseeruddin Shah, my guru, had once told me, “If you can see the conflict of a character on screen, do it. Else, don’t.”

While you made your debut in both Marathi and Hindi cinema the same year, by the time you actively began pursuing Bollywood, you were a Marathi film star. Despite your standing in Marathi cinema, did you have to face the outsider struggles?

Luckily, I have only seen the good side of Bollywood because I have worked with the best of directors. The mainstream projects I did, the way I was treated was amazing. Like for Gully Boy, we used to have our rehearsals at Zoya’s house. We would have so much fun. So, I don’t know what this struggle is because I got work on the basis of my previous performance. My pace has been different. I, myself, have gone to really few people to ask for work.

Be it Zoya, Anurag or Nandita Das or Ruchika Oberoi, who made Island with me, none of these people ever made me feel I was working outside the Marathi film industry or that I was alone.

For that matter, when I worked with Ranveer, all our conversations used to be about acting. We would exchange notes on how we prepared for Padmavat and Raman Raghav. It was an actor talking to another actor. There was no interference of stardom. I worked with Gulzar saab when I was young, and he was so affectionate towards me. I have only gotten love and affection from Bollywood.

Even when I attended the Filmfare Awards, which is the most Bollywood thing ever, I felt loved. I never felt like a newcomer here. After watching Gully Boy, Vidya Balan took my number from Zoya, called me and said, “I pray to God you get great roles in future.” This is not just praise but good wishes. Bollywood has always made me feel I existed here, that I belonged here.