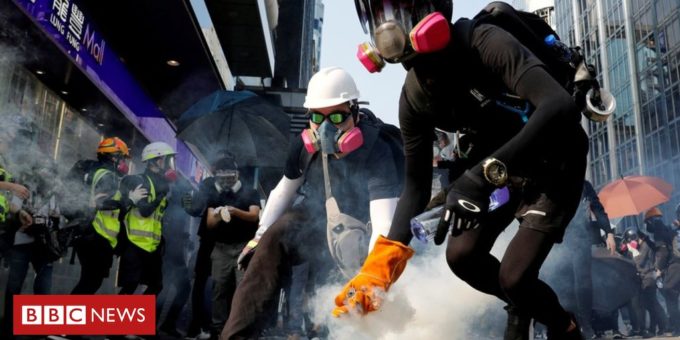 US President Donald Trump has signed into law a bill that supports pro-democracy protesters in Hong Kong.

The Human Rights and Democracy Act will mandate an annual review, to ensure Hong Kong has significant autonomy from the rest of China.

Mr Trump said he signed the law “out of respect for President Xi [Jinping], China, and the people of Hong Kong”.

But the law will anger Beijing – Chinese officials have previously called for the US to “stop meddling”.

Mr Trump is currently seeking a deal with China, in order to end a damaging trade war between the two countries.

The president also signed a second bill, which bans the export of crowd-control munitions to the police in Hong Kong – including tear gas, rubber bullets and stun guns.

“[The bills] are being enacted in the hope that leaders and representatives of China and Hong Kong will be able to amicably settle their differences, leading to long-term peace and prosperity for all,” Mr Trump said.

What does the law say?

The bill was introduced in June in the early stages of the protests in Hong Kong, and was overwhelmingly approved by Congress last month.

It says: “Hong Kong is part of China but has a largely separate legal and economic system.

“The [annual review] shall assess whether China has eroded Hong Kong’s civil liberties and rule of law as protected by Hong Kong’s Basic Law.”

The US will monitor Hong Kong to make sure it is autonomous enough to justify its special trading status.

Among other things, Hong Kong’s special trading status means it is not affected by US sanctions or tariffs placed on the mainland.

The bill also says the US should allow Hong Kong residents to obtain US visas, even if they have been arrested for being part of non-violent protests.

What is the situation in Hong Kong?

Hong Kong’s protests started in June against a proposed law to allow extradition to mainland China but it has since transformed into a larger pro-democracy movement.

Protesters have thrown petrol bombs and attacked businesses seen as being pro-Beijing.

The protesters, meanwhile, have accused police of brutality.