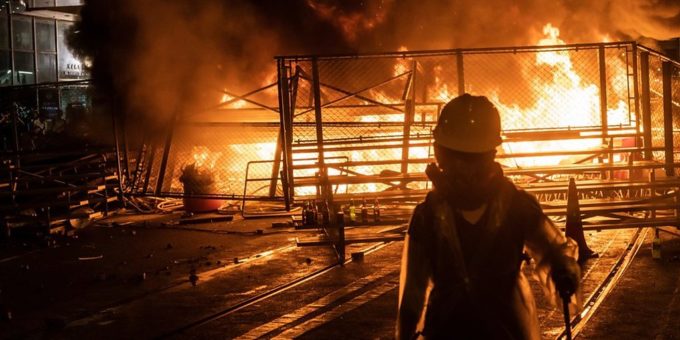 The report said officers had acted within guidelines but called for a review of the use of tear gas.

It criticised demonstrators for complaining about police brutality while ignoring their own wrongdoing.

The report has been welcomed by the territory’s leader, Carrie Lam, but the opposition and human rights groups have dismissed it as a whitewash.

The protests started last June against plans to allow extradition to mainland China, but developed into a broader call for political change.

The highly-anticipated report by the Independent Police Complaints Council (IPCC) also found no evidence of police collusion with gang members during a 21 July mob attack at a train station in Yuen Long district.

Armed masked men – dressed in white shirts and suspected to be triad gangsters – assaulted pro-democracy protesters and passers-by in the area.

The IPCC did not address allegations of misconduct against individual officers during months of unrest, during which more than 8,000 protestors were arrested.

It said accusations of police brutality must not be used as “a weapon of political protest”.

Responding to the report, pro-democracy protesters and politicians said the IPCC had turned a blind eye, and insisted on an independent inquiry led by judges.

“Those who wrote this report, they simply chose to look the other way,” said pro-democracy legislator Claudia Mo.

“That’s why we have been adamant about our demand that there has to be a proper, genuine, independent inquiry into all this police brutality that’s been so blatant, so transparent in Hong Kong.”

An international panel of experts resigned from their roles as advisers to the IPCC last year, saying the body did not have the capacity to conduct a proper investigation.