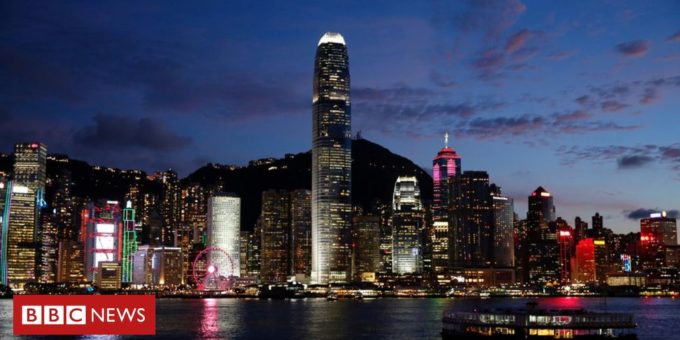 Foreign journalists in Hong Kong are facing “highly unusual” visa delays at a time of high tension between the US and China, a group representing international media has said.

The Foreign Correspondents’ Club (FCC) suggested visas were being used “as a weapon in international disputes”.

Foreign media face restrictions on the Chinese mainland but Hong Kong has long been an exception.

The warning comes after China suggested US media could face “countermeasures”.

The US had not renewed the visas of any Chinese journalists since May 11, said foreign ministry spokesman Wang Wenbin on Tuesday.

“If the US persists, China will take a necessary and legitimate response to safeguard its rights,” he said.

In its statement the FCC said that journalists should not be targeted for actions taken by their home countries.

“The FCC calls on the Trump administration to lift its restrictions on Chinese media working in the US, and on Hong Kong and China’s governments to refrain from retribution in targeting US media and journalists working in Hong Kong,” it said.

Many foreign media organisations, including CNN, CNBC, Bloomberg and the BBC, have staff in Hong Kong.

The New York Times last month moved some of its staff from the city to Seoul, South Korea. It warned that a controversial new security law had “unsettled news organizations and created uncertainty about the city’s prospects as a hub for journalism”.

The FCC said several media outlets in Hong Kong had reported delays in obtaining or renewing visas for journalists of several nationalities.

“Restricting journalists in Hong Kong by reducing their numbers and interfering with their ability to report freely will damage Hong Kong’s international standing and reputation,” it said.

Press freedom in Hong Kong has been in the spotlight in recent weeks, after Beijing introduced the new security law which critics say drastically curtails free speech.

The government says it is necessary to restore stability and security in Hong Kong, which was hit by months of often-violent protests last year.

In its statement on Thursday, the FCC urged the Hong Kong government “to clarify the impact of the new national security law on journalists working in the city”. It asked for a guarantee that journalists would be “free to continue their work without intimidation or obstruction”.

Are foreign journalists under pressure in Hong Kong?

When the former British colony was handed back to China in 1997, it was guaranteed substantial freedoms under a “one country, two systems” principle.

But even before the 2020 security law Beijing had been accused of increasingly undermining freedom of speech and the media.

In 2018, Financial Times journalist and FCC vice-president Victor Mallet was barred from entering the city on a tourist visa. It came a month after the territory refused to renew his work visa without explanation.

The FCC had previously angered Beijing by hosting a guest speaker who advocated Hong Kong independence.

Earlier in 2020, mainland China effectively expelled journalists from three leading US newspapers when it ordered reporters from the New York Times, the Washington Post and the Wall Street Journal to return their media passes within days.

What is the new security law?