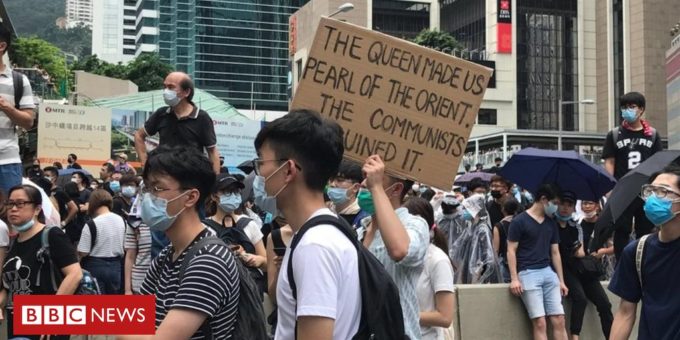 Hong Kong protesters have come out in their thousands to march against a government plan that would permit extradition to mainland China.

Critics fear the bill will eventually allow Beijing to target political opponents in the region.

Hong Kong’s government under Carrie Lam insists there are safeguards in place for the extradition not be abused.

But that’s done very little to stem the overwhelming opposition to the plans.

The reading of the bill scheduled for earlier on Wednesday was eventually delayed by the authorities – but protesters are staying on the streets, with some saying they would not leave until the bill was scrapped.

The opposition to the bill is widespread and comes from all sections of society, where people fear China’s justice system is deeply flawed and will lead to further erosion of Hong Kong’s judicial independence.

The BBC spoke to several of the people out on the street.

“If I don’t come out this time, there might not be a next time,” Iris Tang, a 30-year-old nurse manning a makeshift supply station of helmets, masks and other items, told the BBC.

“I don’t accept the bill because Hong Kong will lose its freedoms.”

The protesters have blocked key roads around government buildings, including the Legislative Council (LegCo) complex.

‘We don’t know what will happen’

“I am very glad to see so many young people here,” 51-year-old accountant Mr Lee told the BBC.

“Today reminded me of the Umbrella Movement five years ago but this crowd seems to be even younger.”

“We don’t know what will happen,” he said. “But I hope Carrie Lam will change her mind.”

Many of the protesters are veterans of the 2014 Umbrella Movement when tens of thousands of people camped in the streets for nearly three months to demand fully democratic elections.

Some protesters – most of them in black and wearing masks – are removing bricks from Lung Wo Road, where there have been minor scuffles between protesters and police.

Mr Cheung, 32, is one of the demonstrators. “We are not planning to throw bricks later,” he says, adding that the protesters are making a brick wall. “It’s for self-defence in case police charge at us in order to disperse the crowds.””But the government is too hardline and unwilling to make any compromises,” he says.

“It is the government who incites every good-hearted person to come out. We don’t know each other here but we share the same goal.”

Police in some areas have responded to the demonstrators by shooting water cannons and pepper spray at protesters. Later in the day police fired rubber bullets and tear gas as anger spilled over into violence.

“Carrie Lam is the biggest problem and this will lead to the end of Hong Kong,” another protester, Ms Ng, told the BBC.

“The bill will affect the future of our children,” she said, adding she has a son who is in his 20s.

‘I am defending my values’

Wednesday’s protests are the second demonstration after last Sunday’s massive show of strength.

“Hong Kong will just become another Chinese city if this bill is passed,” another protester, 18-year old Mike, told the BBC.His friend, 21-year old Mr Cheung, adds: “I am doing what I think is right. I am defending my own values.”

“We can do very little,” he says. “We are one of seven million Hong Kongers but we want to speak up.” “We are wearing masks to better protect ourselves. First, we don’t want to be identified. But tear gas was fired suddenly without any warning last time. People were caught off guard.”

Opinion | The Meritocracy Is Under Siege

Expired Drugs in Stores: Producers, importers to destroy them
2019-06-24