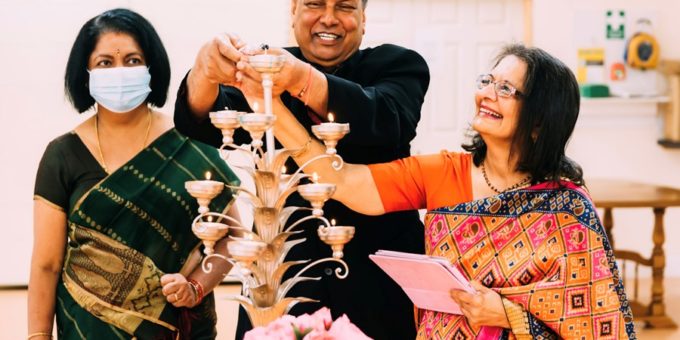 The Hindu Council of Wales celebrated Raksha Bandhan in Wales with members of the armed forces.

This annual Hindu ceremony usually involves sisters of all ages tying a talisman, or amulet called the Rakhi, around the wrists of their brothers, symbolically protecting them, receiving a gift in return.

The event was organised by the Hindu Council of Wales in conjunction with the Indian Honorary Consul Raj Aggarwal.

As per previous years the event was to show support and thank the armed forces, emergency services and community leaders for their valuable contribution to the community.

Speaking at event at the Sanatan Mandir Community Centre in Cardiff, Raj Aggarwal said: “It is such a special moment to be able to enjoy each other’s company today.

“It’s been so long that we’ve not been allowed to have any events or celebrations, and it’s something that’s been greatly missed. It’s great to see so many familiar faces here today. It is dedicated to friendship, mutual support, and protection for each other. The event has been a superb opportunity to reaffirm the strong bonds of brotherhood and emphasises the core values of courage, discipline, care and affection.”