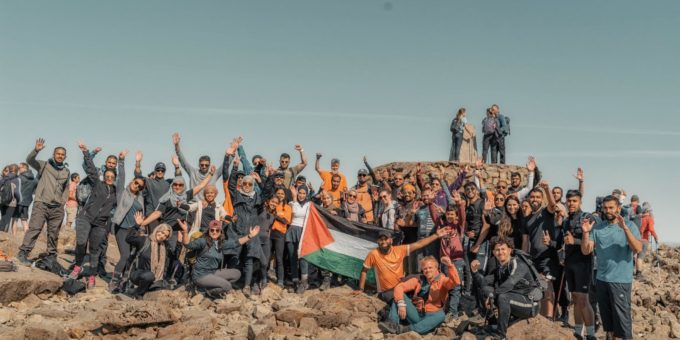 THE Muslim walking group that defied racists to scale Scotland’s biggest mountain have raised a five-figure sum for charity.

Muslim Hikers scaled Ben Nevis on Saturday in a charity trek that has brought in more than £35,000, with more still being added.

The 70-strong group included people who had never climbed a Munro before, and some had made a 15-hour coach journey from London to Fort William to take on the challenge.

The fundraiser was already planned before far-right outfit Patriot Alternative used the famous peak to film a publicity video, unfurling a banner proclaiming “white lives matter” at the top.

But after that, Haroon Mota, founder of Muslim Hikers, invited people of all backgrounds to join the climb and “stand with us against such groups promoting discriminatory views”.

Two of those who did are David Balharry and Kevin Lelland, chief executive officer and head of development at the John Muir Trust – the charity that cares for the mountain.

At the time of the far-right row, the organisation – named in honour of the Scots naturalist known as the “father of the national parks” – said it was “deeply angered” and condemned the mountain’s use in “abhorrent racist propaganda”.

Mota, from Coventry, is an experienced hiker and has scaled Ben Nevis 15 times. He’s also running marathons in Berlin, London, Chicago and New York this year to raise cash for Penny Appeal, the same cause that benefited from last weekend’s climb.

Those funds are directed towards humanitarian efforts in Palestine and to the provision of clean water in Asia and Africa.

Mota told The National how he experienced trolling and “nasty comments” on social media after speaking out against Patriot Alternative.

However, he said: “I think we did the right thing. We put them in their place by turning up and showing how diverse our community is and how beautiful the mountain is. Everyone can turn up and be united.”

The event took place in excellent conditions, with participants posing in the sunshine for photographs at the top.

However, Mota says there was some concern amongst the group, which aims to encourage Muslims to take full advantage of the outdoors, about a far-right response to their bid.

He said: “There was a little bit of worry and concern about whether there would be a counter-protest. They knew about us turning up, were they going to try to provoke a reaction?

“However, we had a fantastic time. The weather was incredible – I’ve never seen it this good.

“The sense of community is really powerful. Community means so much; we can all support each other.

“The mountain belongs to everybody and everyone can be there.”