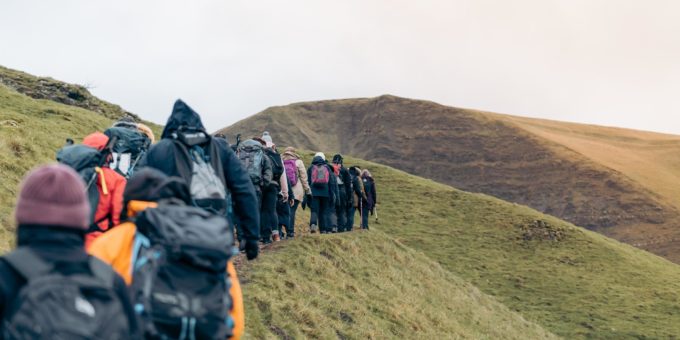 MEMBERS of a hiking group have been hit with a “backlash” of online hate after posting pictures of their Christmas Day hike in the Peak District.

A total of 130 people signed up for the Mam Tor mountain walk, organised by the Muslim Hikers group, which has many members from Bradford.

Muslim Hikers is a grassroots initiative and was set up in lockdown to help tackle loneliness and isolation in Muslim communities across the UK.

But the hikers were to suffer a torrent of offensive comments after their winter event, being branded ‘hooligans’, told they were ‘pathetic’ and urged to ‘leave this place alone for proper walkers.’

It was the third event held by the group this year, following a walk up Mount Snowden in Wales in the summer, and a walk in the Peak District followed by afternoon tea in Autumn.

The group’s founder Haroon Mota, also known as the Marathon Man, has always been a hiking enthusiast and has a number of achievements under his belt such as climbing mountains in South America, the base of Mount Everest, and climbing Kilimanjaro.

The event on Mam Tor, near Castleton, Derbyshire, brought Muslims from across the UK to the Peak District, including people from Bradford, Leeds, Sheffield, and Batley.

The walk was seen as a success by all those involved, who were happy with the turnout. However, after pictures were posted on social media, some people reacted angrily.

One man wrote: “PATHETIC go back to what you did before the pandemic and leave this place alone for the proper walkers.”

Another commented: “Hooligans destroying the fragile moors for your own gratification.”

One female commented: “Wow it’s like the migration of Wildebeests in the Serengeti, they just keep coming.”

Organiser, Mr Mota said: “We know these problems exist in society but it’s a shame that we had had to face this.

“What we’re trying to do is inspire and encourage people to go out and this kind of backlash might have a negative impact on our cause.

“We want everyone to have a positive experience in every way possible and I never thought we would get these comments based on what we were doing.”

Mr Mota felt that some of the comments held a racial undertone and that the group only faced these remarks based on what the group looked like.

He highlighted that one of the comments about going back to what you did before the pandemic had connotations of ‘go back to where you came from,’ highlighting that the group didn’t belong there.

“I know that if this wasn’t a group of Muslims, we would be getting applauded and people would be impressed but because of who we are, we get comments like this.

“I don’t think anyone was particularly offended or hurt by the comments, these issues exist, and we have to get past it.

“I just don’t understand what they mean by proper walkers, walking is for everyone and anyone, it’s not specifically for one group.”

Mr Mota posted a number of comments online to showcase the negative remarks the group received and was met with a supportive response.

One commented: “Wonderful images, please don’t let the minority ruin what is a wonderful thing! Hope you enjoy many more walks.”

Another commented: “Those proper walkers probably only venture 500 meters away from their car! The Peaks has this brilliant ability to swallow up vast numbers, so you are walking in almost isolation. There is plenty of room for all. Good luck keep on coming, please.”

Mr Mota took to Twitter to say: “We know it’s only a small minority of people who think this way, but we’ve seen plenty of comments highlighting the problems within our community that exist. To everyone who has supported us so far. Thank you.”

The group has several events lined up for 2022, with more hikes across the UK.

Mr Mota said: “Muslim Hikers is open to people of all backgrounds and we want to emphasise that walking and hiking are for everyone.

“I’ve been an enthusiast for over 15 years and have never had any negative comments whilst I’ve been climbing mountains and running marathons.

“We won’t be stopping because of these comments.”