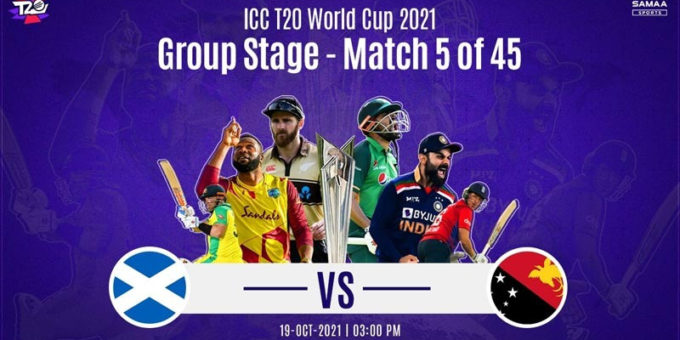 With Super 12 on their sight, confident Scotland
are ready to face newcomers Papua New Guinea in their second match of the ICC
T20 World Cup.

Victory
against PNG will bring the Scottish side one step closer to the Super 12 stage.
Their victory against Bangladesh is still the highlight of the tournament thus
far.

Meanwhile, Papua
New Guinea are a loss away from an early exit, less than 48 hours after their
maiden T20 World Cup outing against Oman.

Both sides
are familiar with the conditions in Oman, having been in a country for over a
month now.  They also played two 50-over
matches and a T20I in the last three weeks alone against each other.

Scotland
and Papua New Guinea have met twice in T20Is, with the former winning on both
occasions.

In their
most recent meeting, on October 8, Scotland won by eight wickets after chasing
down 155 to win with 13 balls to spare.

That PNG,
who are participating for the first time, are largely down to Norman Vanua’s
blistering half-century that brought them back from the brink of an exit in
their penultimate game of the qualifying tournament in 2019. On Sunday, Vanua,
an allrounder, fell for just 1 against Oman.

For
Scotland, Chris Greaves is the match to watch out for. The 31-year-old scored
45 runs off 28 balls to lead Scotland’s tail-end resurgence before taking the
key wickets of Shakib Al Hasan and Mushfiqur Rahim to disrupt Bangaldesh’s
chase.

Is this shoe pink or grey? What you see tells something interesting about you
2019-05-03