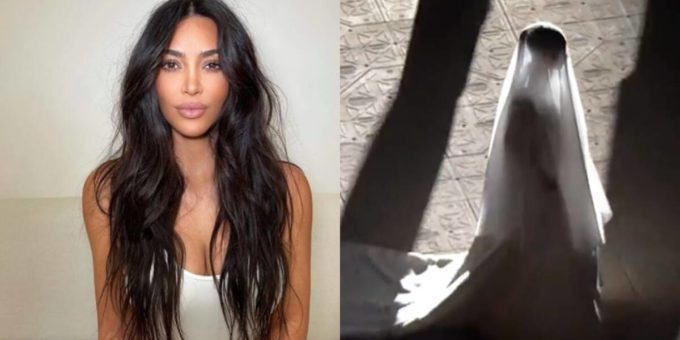 To support ex-husband Kanye West, Kim Kardashian, till now, has made sure that she is present at each listening party of his soon-to-be-launched album Donda.

At the latest event at the Soldier Field Stadium in Chicago, Kim appeared in a Balenciaga wedding gown during the final performance. The 40-year-old had her entire face covered in a knee-length veil. The dress also featured a sweeping trail. Here’s a glimpse:

Turns out the gown was earlier showcased at the designer’s first haute couture show in more than 50 years, held in Paris in July. The outfit was inspired by a 1967 couture gown designed by Cristobal Balenciaga himself. According to Independent, the dress is made of thick fabric that gives it a heavy fall, along with structured cap sleeves. Interestingly, it does not feature any embroidery.

Kim’s appearance in the outfit marked the first time that the creation was seen since the runway show, which was also attended by Kanye. Kim’s identity was initially confirmed by sisters Kylie Jenner and Khloe Kardashian through their Instagram stories. Recently, the celebrity herself shared a sneak peek on Instagram.

Kim filed for divorce from Kanye in February this year. They have four children–North, Saint, Chicago and Psalm.

The Bachelorette Spoilers: We Finally Know Who Katie Chooses!
2021-06-24

From cheat-day indulgences, to fashion mantra and dream destination: Ananya Panday reveals it all
2021-03-23