Heavy rains lashed parts of Mumbai and its suburbs for several hours late yesterday night and early this morning, leading to flooded roads and some delays to local trains. Waterlogging was reported from several places, including Gandhi Market area, Hindmata junction and Dahisar subway.

Waterlogging was also reported from the Sion, Bandra, Andheri and Santacruz areas of Mumbai. Visuals from news agency ANI showed waterlogged tracks at Sion Railway Station, where hundreds of passengers are sheltered in platforms – an unwelcome sight during the pandemic.

In one of the more dramatic sights, a truck carrying 20 tons of tomatoes overturned on the Eastern Express Highway. Visuals of the clean-up operation showed a mountain of bright red tomatoes piled up against the side of a flyover, as a JCB earth-mover tries to gather up the spilt produce. 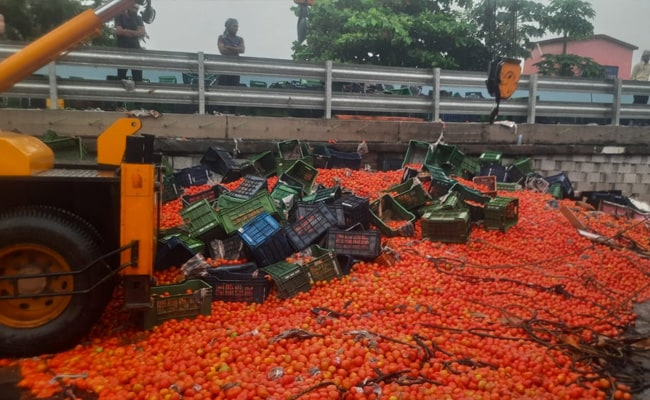 At 9.30 am Central Railways put out an update that said trains on the main line (CSMT to Kalyan/Karjat, Kasara) and the harbour line (CSMT to Panvel/Goregaon) are 20-25 minutes late.

“Due to heavy rains and waterlogging on slow lines near Kurla-Vidyavihar, local trains are running 20-25 minutes late,” Shivaji Sutar, the chief PR officer, was quoted by news agency PTI.

Services on the trans-harbour line (Thane to Vashi/Panvel) and 4th corridor (Belapur/Nerul-Khatkopar line) are running on schedule.

Central Railway runs suburban services on four separate corridors in the Mumbai metropolitan region. Before the COVID-19 pandemic, it used to operate over 1,700 services and carry over 40 lakh passengers on a daily basis.

Western Railway said that despite the heavy rain its suburban services are running normally between Churchgate and Dahanu Road, with only minor delays due to low visibility in some areas.

Local train services are currently running only for personnel engaged in health and other essential services, and are out of bounds for general commuters in view of the pandemic.

The city’s public bus services – BEST – has also had to divert or suspend some of its routes; as many as 87 services were re-routed and cancelled as of 9 am, according to a tweet.

Earlier the India Meteorological Department (IMD) predicted moderate to heavy rainfall in the city and its suburbs, with the possibility of very heavy rainfall over isolated places today.

With input from ANI, PTI