Hearthstone is a great example of Blizzard making free-to-play online games with an excellent monetisation plan and supporting them for long periods. For the uninitiated, Hearthstone is a card game that released back in 2014 and the launch of the latest expansion — Rise of Shadows — brought me back to the game once more.

With each new expansion of Hearthstone the metagame changes quite a bit. This is necessary to keep experienced players engaged and offer them a fresh challenge. However for players who haven’t played Hearthstone for some time, there’s a steep learning curve. This is why I prefer exploring the single-player part of Hearthstone’s expansions over multiplayer.

Blizzard’s strategy is to release the new cards in multiplayer first and release single-player later and I’ll be sure to write about Rise of Shadows’ single-player mode when it’s out in May. This time around the single-player content looks exciting because it’s said to be a story told over three expansions, which gives new players a big reason to try Hearthstone.

However, the Hearthstone multiplayer scene can be quite intimidating if you haven’t been playing regularly. I used to play Hearthstone regularly in 2014 and early in 2015, but after that I stopped playing it for quite some time. I returned to Hearthstone recently to explore The Boomsday Project, particularly for the Puzzle Lab single-player content. Even then I felt the same thing that I do now — the multiplayer has changed a lot and is difficult to get into once more.

Hearthstone constantly keeps changing its list of cards to keep the game fresh. This works by retiring really old cards when new ones are introduced. If you missed a couple of expansions and returned to the game, you’ll be behind other players and that makes the entry barrier a bit steep.

Let’s make one thing clear here — you don’t really have to pay to win in Hearthstone. There are plenty of players who keep playing for free but it does require quite a bit of grinding to get more new cards and compete with some of the most powerful decks in the game. The real hurdle for most new players to cross is to get used to the idea that Hearthstone requires a lot of practice before you understand gameplay mechanics to have fun in multiplayer.

One workaround that a lot of players try is to copy decks others use and try to win that way. This lets you start playing quickly but understanding deck balance and knowing when to play which card is the most important skill you can have in Hearthstone. That’s not something you can gain just by copying others’ decks wholesale.

The other problem with copying decks is that new players won’t have the cards required because they haven’t played the game long enough to get these from card packs (which basically function like a loot box). You can purchase card packs to speed up this process as well but it’s not exactly cheap either. In Rise of Shadows, two packs of five cards each cost $2.99 (roughly Rs. 200) and 60 packs are priced at $69.99 (roughly Rs. 4,900).

Plenty of these are duplicates so it’s best to avoid trying to buy all the 130 new cards in Rise of Shadows. You’ll eventually be able to earn them through gameplay. Once I logged in to Hearthstone, I did get a few messages from the developers explaining what’s changed but I think it’s not enough for those who’ve stayed away from the game for a long time.

The time and practice it takes to get into Hearthstone again may be a bit too much for many people. After playing Rise of Shadows, I feel this quite strongly. I had to go online and search for some decks people have been building to figure out possible strategies, and when I did that I came across way too many terms that I had to re-learn. There’s a very helpful page on the Hearthstone site that shows all the cards in Rise of Shadows so you can study that and work your way towards obtaining the cards that appeal to you.

As I mentioned before, I’d been away from Hearthstone for way too long and that has definitely hindered my enjoyment of this game. There are multiple character classes in Hearthstone and I had to go check out cards available for each class to make a decent deck and try to compete. I had to spend some time in single-player practice to get a feel of each character before settling in on a couple of classes. 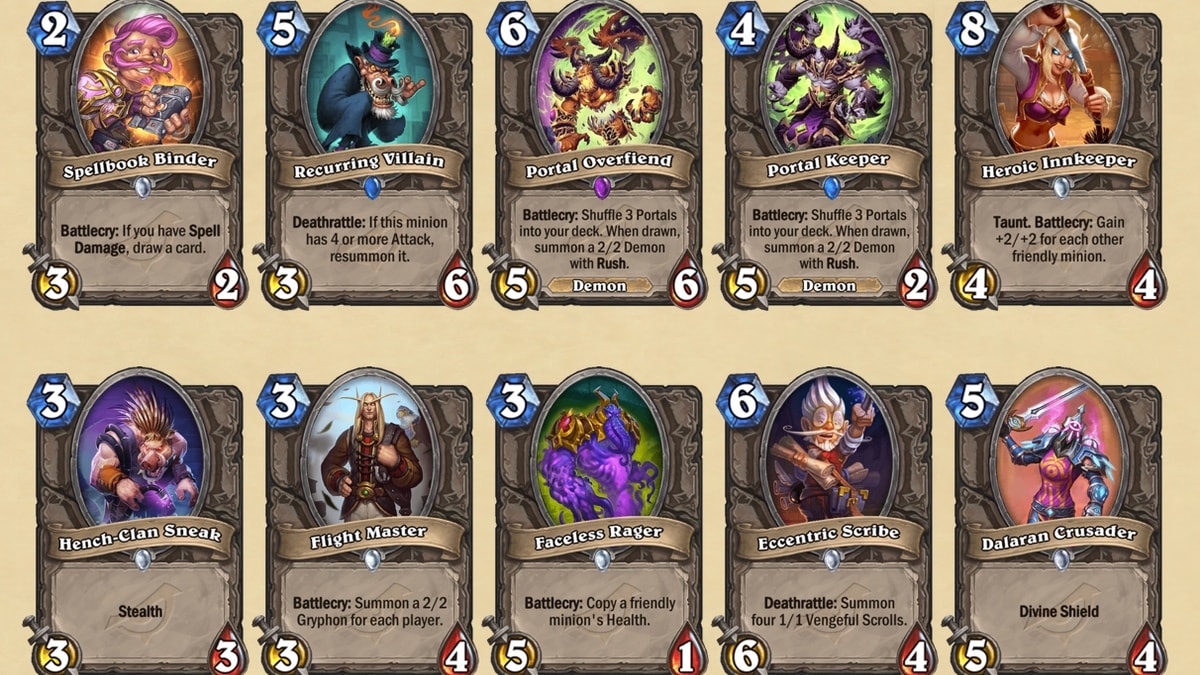 Rise of Shadows introduces some fun new mechanics and there’s some immense potential here. There are certain scheme cards that grow stronger with each turn. For instance Dr. Boom’s Scheme lets your character gain 1 armour and for each turn that you don’t play it, this increases by 1. If you get Dr. Boom’s scheme now and play it 5 turns later, your character will gain 5 armour and that could save you from an otherwise fatal blow. Similarly Rafaam’s Scheme summons an imp with 1/1 health and it increases the number of imps with each turn. When you combine these scheme cards with others in your deck you could create a devastating combo.

Another new mechanic is Twinspell, which adds a copy of the same spell card to your hand, essentially allowing you to play the spell once more. There are Lackeys in the game that are minion cards with low attack and health but with a nice Battlecry (action executed when the card is played) such as adding two more Lackeys to your hand.

These mechanics are actually pretty good and led to some interesting situations while I was playing Rise of Shadows. There was one game where I didn’t play a single minion for five turns and lost pretty badly because by then it was too late to counter the opponent’s strategy. This was because of poor deck selection where I had too many cards that cost five mana or more, which can’t be played at the beginning.

Once I fixed that I did have a better time playing the game even if the results weren’t too much better. I still found myself spending too much time trying to learn what various terms mean to make a decent deck. For instance, I had to re-learn what Lifesteal, Silence, and Secret mean as these actions are mentioned on cards but due to their anaemic descriptions it was tough to decipher what they’d actually do in-game, forcing me to resort to a guide to figure it out.

The ideal strategy to get into Hearthstone now probably involves playing a lot of single-player against AI, getting used to the cards, crafting a decent deck with basic cards, and then going to multiplayer. I think that the time this process takes is a bit too much to invest. If you’re fine with that, Hearthstone still is a pretty engaging game that can keep you occupied for a long time. However, I’m not, and that’s why I’ll be waiting for the single-player content from Rise of Shadows to show up and have fun playing that.

If you’re a fan of video games, check out Transition, Gadgets 360’s gaming podcast. You can listen to it via Apple Podcasts or RSS, or just listen to this week’s episode by hitting the play button below.

Bharat – Disha Patani broke her knee before shooting with Salman Khan for ‘Slow Motion’ and the actress REVEALS all the details! | Bollywood News

Madhuri Dixit tells Karan Johar when she has to go onstage after a volatile moment: : ‘There have been moments when I pretended nothing’s wrong…’
2022-03-07