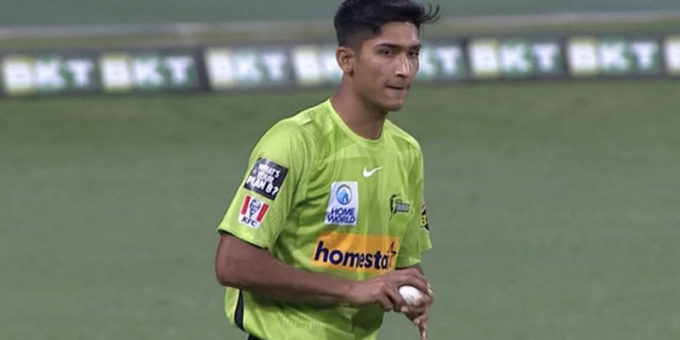 Pacer’s action was reported in BBL

Pakistan pacer Mohammad Hasnain is set to undergo bowling action test in Lahore today, after it was reported by the umpires in the Big Bash League.

The
right-armer played five games for Sydney Thunder before returning back home for
the Pakistan Super League, where he will represent Quetta Gladiators.

It must be
noted that Hasnain was accused of chucking during Big Bash League (BBL) match
against Sydney Sixers on January 15.

The incident
occurred during the first innings of the match, after Sixers’ captain Moises
Henriques failed to connect when Hasnain bowled a bouncer. Words were exchanged
between the duo, with Henriques telling Hasnain “nice throw, mate”.

According to the ICC rules and regulations, an illegal bowling action is where a player is throwing rather than bowling the ball. This is defined by the ICC as being where the player’s elbow extends by an amount of more than 15 degrees between their arm reaching the horizontal and the ball being released.

It could take up to 14 days before the result of the test comes out, which means that Hasnain’s participation in the opening games of PSL will not be affected. However, if his action is illegal, Hasnain will be suspended from bowling in international cricket and domestic events around the world until he rectifies his action.

You were just too hot to be handled at BBL and that’s what all matters.
Keep bowling those 🚀 🚀🚀 #WeTheGladiators #ShaanePakistan

Tele-Poll Was My Idea, Says AAP’s Choice For Punjab

Wheat Procurement To Slide By More Than Half As Exports Rise: Food Secretary
2022-05-04