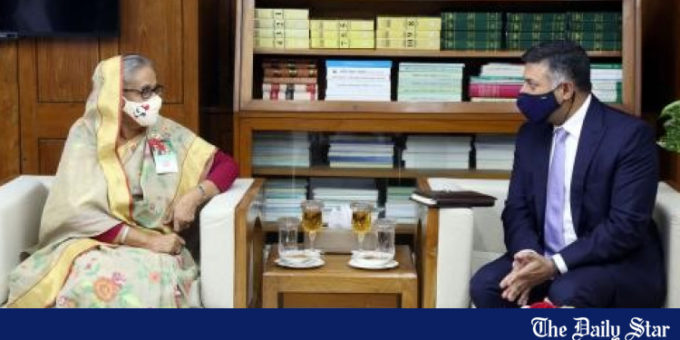 Prime Minister Sheikh Hasina yesterday (June 23, 2022) proposed conducting dredging of rivers jointly with India which are shared by the two neighbouring countries for their mutual interest.

The premier made the proposal when Indian High Commissioner to Bangladesh Vikram Kumar Doraiswami called on her at her Jatiya Sangsad Office.

During the talks, Hasina said that water conservatory could be ensured through river dredging on regular basis.

In this regard, she expressed concerns over havoc caused by the recent floods in Assam, Meghalaya and Arunachal states of India.

The PM informed the Indian envoy that the floods have ravaged much of the country’s north-eastern part following heavy rains across mountains of the north-east India.

She said the Bangladesh government stands ready to work together with India to overcome any such natural disaster.

In reply, Indian envoy Doraiswami said that his country is also ready to assist the flood victims in Bangladesh.

The press secretary said that Doraiswami handed over a letter of Indian Prime Minister Narendra Modi in which he invited Hasina to visit India.

The high commissioner said officials of the two countries are working through diplomatic channel on the proposed visit, expected to take place in September next.

He mentioned that there will be a ministerial level meeting between the two countries just a couple of days before the visit of the Bangladesh PM to make it fruitful.

The Indian high commissioner congratulated the PM on the 73rd founding anniversary of the ruling Awami League.

Besides, he also greeted the premier for successfully completing construction works of the much-cherished Padma Bridge over the mighty river.

In this regard, he mentioned that the newly constructed mega bridge will connect both the countries directly and will enhance connectivity in the region.

The Indian High Commissioner apprised the Prime Minister that a trial run has already been done on transporting goods to India using Chittagong port, while such trial runs will also take place on four different routes.

While talking about the issue of electricity, the Indian envoy said, New Delhi will form a company and make investment to build transmission line to reach electricity from Nepal to Bangladesh.

Aamir Khan clicked out and about in the city