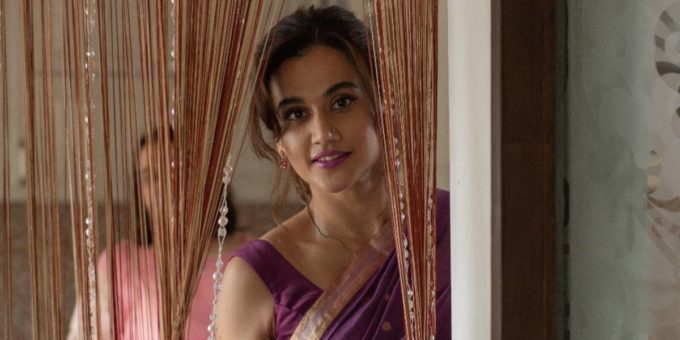 Netflix on Friday dropped the first trailer of Taapsee Pannu’s next, Haseen Dillruba. The messy love triangle will see Taapsee indulge in a game of love, lust, deceit and a murder, with Vikrant Massey and Harshvardhan Rane playing pivotal roles. Directed by Vinil Mathew, Haseen Duillruba has been penned by Kanika Dhillon, who has also been credited for the dialogue and screenplay.

Haseen Dillruba trailer opens with the introduction of Rani Kashyap (Pannu), who wears her sexuality with pride. She is a fan of ‘Dinesh Pandit’, the writer of pulpy fiction in Hindi. The fiery woman gets married to Rishu (Massey), a man who lost his heart to her at first glance. Tattooing her name on his wrist, Rishu tries hard to keep his newlywed bride happy by all means.

However, her world comes crashing down when a blast leaves her husband dead and she is picked up by the police as the prime suspect. As the investigation moves on, layers come off Rani’s personality as we see her being attracted towards her neighbour (Rane). There’s also a hint that there is more to Rishu than meets the eye.

During the interrogation,  she leaves the police officer stumped, when she quotes her favourite writer and says ‘true love is incomplete without a splatter of blood’. As Rani rightly shares that every story has a different side, it only depends on who is narrating it. This murder mystery would be solved on July 2, when the film drops on Netflix.

The trailer of Haseen Dillruba will leave you intrigued and curious. Coming to talent, while Taapsee and Vikrant keep you hooked with their performances. Harshvardhan looks like the perfect temptation while it’s exciting to see CID fame Aditya Shrivastav back on screen as the befuddled cop.

On shouldering Haseen Dillruba, Taapsee Pannu in a statement shared that she had a very strong gut feeling the day she heard the basic idea from Kanika. She also revealed that she wasn’t the first choice for the makers. “It came to me after all their options were exhausted. And the good old saying that, if it’s meant for you it will come to you stands true for this case. It’s not just a beautifully written mystery, it has such wonderful characters involved which is candy in an actor’s hands. I am glad I got to experiment with my look and performance with this one because I am definitely not the go to person for this kind of character conventionally and we all love to take risks here.”

On his part, Vikrant Massey said, “Haseen Dillruba is the perfect mix of humour, quirk, revenge and romance. I hope it surprises the audience as much as it surprised me when I heard it first. It was an enthralling experience shooting for it. Let us all watch the mysteries unravel itself and learn important life lessons from our beloved Pandit Ji.”

Harshvardhan Rane also added that he feels honoured to be in the same frame with some of the country’s finest talent. “Taapsee and Vikrant, have one thing in common I could never make out if they were joking or if they were serious. I always had to look for tiny nuances to understand the pretext. Working on Haseen Dillruba also gave me a chance to associate with the best film makers, be it Aanand L Rai sir, Vinil sir and Kanika ma’am. I was blown away with the script, a classic whodunit that will keep you guessing until the very end,” he said.

Haseen Dillruba was earlier set to release in cinemas on September 18 last year. However, it was pushed due to the ongoing pandemic. The T-Series and Colour Yellow Productions will premiere on July 2 on Netflix.

Australian bushfires: Why do people start fires during fires?
2019-11-14

This Quick Recipe Of Coconut-Ginger Chutney Will Definitely Ramp Up Your Lunch Today!
2020-12-02