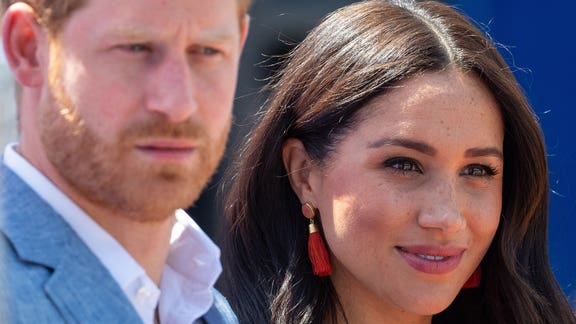 PRINCE Harry and Meghan Markle have issued a legal warning to the BBC over claims the Queen was “never asked” by the couple if they could name their daughter Lilibet.

The Duke and Duchess of Sussex are settling into life as a family of four after the birth of their daughter Lilibet “Lili” Diana.

Meghan and Harry said it was a “very special time” and described the baby girl as “more than we could have ever imagined”.

Lili, a younger sister for the Sussexes’ two-year-old son Archie Mountbatten-Windsor, was born at 11.40am on Friday June 4 at Santa Barbara Cottage Hospital in California weighing in at 7lb 11oz.

Lilibet is the Queen’s family nickname and the choice pays tribute to the monarch at a challenging time for the Windsors, who are mourning the loss of the Duke of Edinburgh.

According to reports, Harry did not seek permission from the Queen to name his child after her but did tell her years ago before he met his wife and became a father.

The BBC quoted a place source who claimed the Duke and Duchess of Sussex “never asked” ahead of the birth of their daughter.

The BBC have since reported they have received a legal letter from Harry and Meghan claiming the reporting was “false and defamatory”.

A spokesperson for the couple said: “The duke spoke with his family in advance of the announcement – in fact his grandmother was the first family member he called.

“During that conversation, he shared their hope of naming their daughter Lilibet in her honour. Had she not been supportive, they would not have used the name.”

Lilibet was a nickname affectionatly given to the Queen as a child by her grandfather George V after Her Majesty had trouble pronouncing Elizabeth as a child.

A Royal Source told The Mirror: “Harry has always enjoyed a wonderful bond with his grandmother, which makes it all the more bizarre that he has gone out of his way to threaten the relationship over the last couple of years.

“They have been incredibly close and as you would imagine have shared some very deep and personal conversations as Harry was growing up, which carried on really until very recently.

“Harry has never made a secret of his wish to have a family of his own, often talking about how it would be great to have a boy and a girl, that he could name after the two most important women in his life, the Queen and his mother.

“He had toyed with the idea of giving a future daughter his mother’s name, but was wary of the attention it would no doubt bring to the little girl.

“In the end, he mentioned Lilibet to Meghan, when discussing potential names for their children and she loved the idea.

“It’s a fitting tribute to the Queen and something many people will hope brings the family closer together.”

Reema Khan Shares An Adorable Video With Her Husband