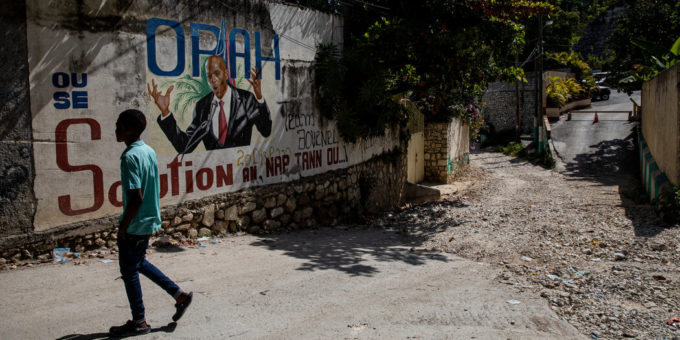 “When Moïse found out about the weapons Hérard ordered, he wasn’t surprised — he was scared,” Mr. Fortuné said.

Mr. Moïse’s relationship with the presidential security forces, already on tenterhooks, further soured. But that changed in February, when Mr. Hérard claimed to have foiled a coup attempt against Mr. Moïse. Suddenly, the distrust waned. Some former aides, like Ms. Antoine and Mr. Fortuné, wondered whether the supposed coup was a false flag, to throw off Mr. Moïse’s suspicions about Mr. Hérard.

After the coup scare, Mr. Moïse went on the offensive, publicly blasting Haiti’s oligarchs and political elite for trying to kill him, including in one of his final interviews with The Times before his death.

Behind the scenes, Haitian officials say, Mr. Moïse began working to take down his perceived enemies. He spoke with his closest aides and select officials to start compiling the dossier breaking down narcotics and weapons smuggling networks in Haiti, including Mr. Saint-Rémy, according to the people involved with the document.

In February, Josua Alusma, the mayor of Port-du-Paix and a close Moïse ally, ordered a crackdown on the eel trade, the industry dominated by Mr. Saint-Rémy. Many of the eels go to China, but the Haitian police are investigating the industry as a way to launder illicit profits.

“I don’t like this business. It happens at night, do you know what I’m saying?” Mr. Alusma said. “There’s no security.”

He said the industry needed to be regulated and taxed. “People like Kiko go in and out of the city,” he said, using Mr. Saint-Rémy’s nickname. “But we are the ones here cleaning his trash,” he added, referring to illegal weapons seized during a raid this year.

Myanmar coup: The women abused and tortured in detention

Apple Event Invite for September 14: California Streaming, What to Expect
2021-09-07