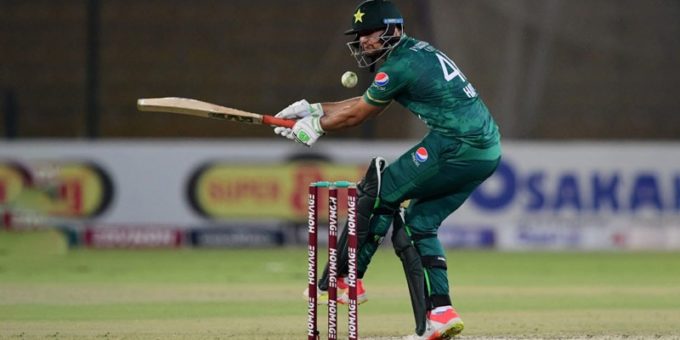 It wasn’t a seasoned player who came to the rescue for Pakistan when they lost two early wickets in the first T20 International against West Indies on Monday.

In fact, it was Haider Ali. Coming in at number three — when Pakistan were struggling at 35-2 after skipper Babar Azam (0) and Fakhar Zaman (10) departed early — the 21-year-old launched the counter attack.

Haider played some outrageous shots all around the circle, smashing six fours and four sixes for his 68 off only 39 balls after having to arrive on the crease by the end of only the fifth over.

The right-hander was humble enough to admit that it was his partner on the crease at that time and now a senior figure in the Pakistan ranks Mohammad Rizwan who planned it out for him.

Haider Ali is going to be a serious player……#PAKvWI

“There was pressure when I came in,” Haider said after the match. “But Rizzi Bhai kept reminding me to assess the pitch and choose the bowlers to go after.”

Rizwan also made sure he kept thing at the other end stable and busy as well to ensure Haider felt free to do what he does best.

“Early on I was playing at 12 from 10 balls,” said the youngster. “We decided to charge together once I’m settled.

“And exactly that happened and that was the reason we put up that partnership.”

The partnership was big. Rizwan and Haider accumulated 105 off just 63 balls together.

Even after Rizwan departed, Haider kept going on before losing his wicket in the last over. At that moment, Pakistan were 191-6 and ended up posting 201 for the visitors to chase.

Haider’s innings was full of shots which aren’t found anywhere in the cricket coaching books. It was a show of improvisation and utter intelligence mixed with power.

The Attock-born player’s previous man-of-the-match performance came in a tougher situation, when he contributed a shrewed 45 off 38 in Pakistan’s successful chase against Bangladesh in a tricky fixture.

These displays are a sign that Haider is a superstar in the making. The secret behind his success though is no rocket science.

“I’m giving more time to hard hitting during practice, it is helping me but there’s a lot to improve still,” he said.

“I’m thankful to God for getting back to back man-of-the-match awards and our team has won, I’m very happy.

“We’ve got a good start and hopefully we’ll carry it on.”