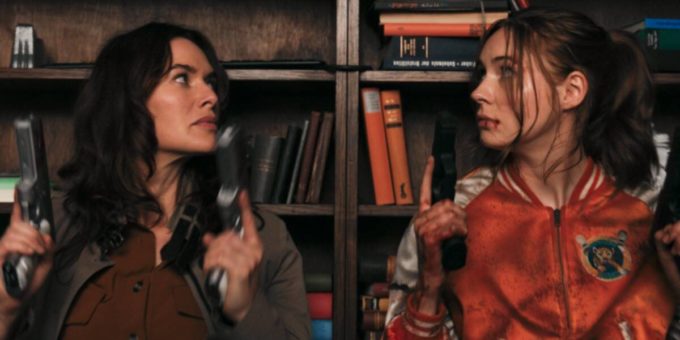 Gunpowder Milkshake, starring Karen Gillan, Angela Bassett, Lena Headey, Carla Gugino, Michelle Yeoh and Paul Giamatti, will premiere on Netflix on July 14. The early reviews of the Navot Papushado directorial are in, and while most say it is colourful and ‘kitschy’, the film doesn’t seem to be getting many brownie points for its storyline progression, despite having a solid premise. It’s winning much praise for its stylistic visuals, acting and action sequences.

Den Of Geek’s Kayti Burt wrote in her review, “Gunpowder Milkshake wants so very much to be a kick-ass, feminist action movie—and it is, if only by virtue of its squad of formidable woman fighters. Unfortunately, in the process, it forgets to invest in an emotionally logical narrative too. Gender-bending the traditional dynamics of an action noir is a great starting point for something new and different, but it doesn’t make a story.”

Indiewire’s Kate Erbland opined, “While the plot leaves plenty to be desired — wait, who did Sam piss off? and why didn’t she visit The Library and the “aunts” who live and work there before this? and what is going on with Nathan? — the relentless zip of the film, plus the pure joy of seeing Gillan and company absolutely wreck their opponents, can’t be denied.”

The Hollywood Reporter’s John Defore noted in his review, “Gunpowder Milkshake takes a femme-centric approach to the uber-assassin format, looking especially eager to get in on that hot Wickiverse world-building action. Though not without its moments, the film offers too little of interest for its leading ladies to do, and feels throughout like an adaptation of a comic book that was written for the sole purpose of being sold to an IP-hungry film studio.”

Deadline’s Pete Hammond mentioned in his review, “As absurdly ridiculous as it all is, and extremely violent, there is fun to be had here because of a terrific cast having a blast. With stars Gillan, Bassett, Headey and Yeoh — who has a great scene involving chains — all having strong action cred of their own, the film never slows down for a pit stop.”

In ‘My Unorthodox Life,’ Julia Haart Bares More Than Just Her Knees