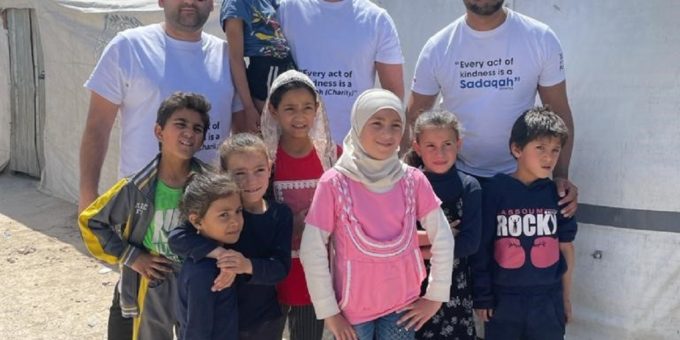 A GROUP of friends from Bradford has distributed more than 3,300 food parcels in Lebanon after raising more than £190,000 to help refugees.

The group flew out to the troubled country to witness the desperate situation first-hand and has distributed food packs bought with the money raised. They handed them out in Syrian and Palestinian refugee camps.

Led by Naheem Akhtar, a director at Cartwright Solicitors, the group of business professionals comprised Faisal Farooqi, Shafia Aziz and Sajid Kiani. They were helped by volunteers Nadia Rajah, Abida Rajah and Faiz Ur Rehman.

Together they decided to help the Lebanon Ramadan Deployment appeal for Syrian and Palestinian refugees.

They raised enough to distribute 3308 food packs to men, women and children living in the camps. The packs – which serve one family for a month – contained food including flour, corn grain, rice, chopped mushrooms, salt, tomato sauce, sugar and lentils. They also handed out 1500 meals as well as medical supplies.

“They were overwhelmed and so grateful for the packs,” said Naheem. “We had little extra treats to the children, which they loved.”

Fundraising began in April when the group created a Just Giving page – Naheem Akhtar Ramadan Deployment to Lebanon 2021. They set a target of £40,000, believing thinking that if they could raise this amount, they would be more than happy and it would be sufficient to go there and make a difference to people’s lives.

Within 20 hours they were inundated with messages of support and donations and were able to hit their target. Four hours later, it had risen to £55,000.

Naheem then made a social media video appeal to all those who has already donated, to make an additional small contribution to reach £80,000.

“We posted the video on social media and shared it with friends and family within two hours were able to hit £80,000,” he said.

The sum kept rising – in five days they had reached £100,00, and through their business and personal contact network it reached a whopping £140,000.

Nominating themselves as attending as volunteers for the deployment to Lebanon, the friends put together a team who would take time out of their lives and cover their own personal expenses to oversee the charity distribution.

They liaised with SKT Welfare, a Muslim charity operating in 30 countries delivering aid to the most vulnerable communities.

Naheem approached SKT and agreed on the best way to distribute the money in the form of food packs. Each £40 pack has been carefully put together.

He said: “We normally donate to charity during Ramadan every year. This year we thought rather than sending the money to a charity and expecting them to make the deployment and distribute it on our behalf, let’s do it ourselves.

“We then decided to let family and friends and anybody else join the cause. People have started to get involved and donate generously.

“The reason why we decided to come to Lebanon is purely because of the humanitarian crisis that refugees are facing and Lebanon is not only accommodating refugees from Syria but also from Palestine Iraq and other neighbouring countries,” added Naheem.

Housing conditions for migrant workers in Canada ‘worse than if we were in prison,’ new report says