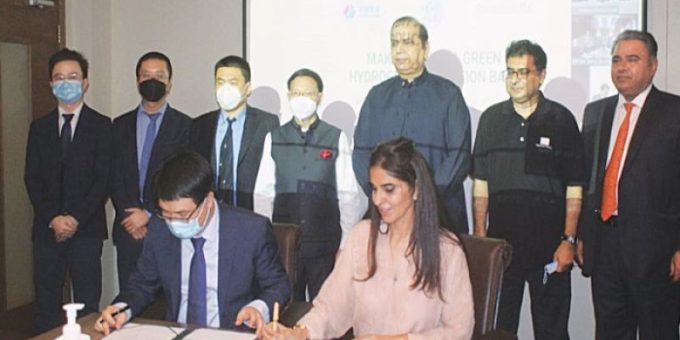 Pakistan’s first green hydrogen plant will be built in Sindh with a capacity to produce approximately 150,000kg fuel per day, it emerged on Saturday.

A memorandum of understanding (MoU) was signed by the Chief Executive Officer of UK-listed Oracle Power Public Ltd, Naheed Memon, and Chief Representative in Pakistan of Power China International for development of the first green hydrogen project in the country.

They said that the announced facility would produce approximately 150,000 kg per day of green hydrogen from a 400MW capacity plant using energy from wind and solar farms.

They said that green hydrogen produced from this plant in Sindh would be exported initially and the sponsors aimed to secure buyers in China and in the region.

The sources said that this important development came a few days before the 26th United Nations Climate Change Conference of the Parties, which would confirm a global commitment to hydrogen economies.

The energy minister said that the initiation of this project also came at a time when Pakistan and China had announced a plan to sign a three-year investment cooperation pact for green projects and Sindh made history in announcing the first green hydrogen project of the country.

He said that Sindh province offered a potential of 50,000MW of wind and 10,000MW of solar power resource at commercial costs of as low as US c 3.5/kWh.

“This cost can be lower when these resources are used as captive power for producing hydrogen,” he said, adding that it was expected that this plant would produce green hydrogen at globally competitive rates well suited for both domestic and export markets.

Mr Shaikh said that this project placed the Sindh province in the lead for the development of the global future fuel and places Pakistan among the ranks of forward-thinking nations.

“The Sindh government has led in the establishment of renewable energy and now it has taken another step in moving to support frontier technology, sustainability and innovation,” he added.

The energy minister assured the sponsors of the provincial government’s support and said that the abundant renewable resources, two ports, and infrastructure in the province made it an ideal location for this setup.

The sponsors told the energy minister that they hoped to secure global support for this important project.

More than 350 hydrogen projects are currently in development around the world seeking to decarbonise economic sectors — such as heavy transportation, industry and even aviation.

Experts say that with the right policy and investment, hydrogen could satisfy as much as 24 per cent of global energy demand by 2050.

Currently, only 4 per cent of the hydrogen is produced from green sources but it is expected to multiply as the global decarbonisation drive is accelerated.

Green hydrogen produced from this plant in Sindh will be exported initially and the sponsors aim to secure buyers in China and in the region.

On UN Day, Pakistan calls for implementation of UNSC resolutions on Kashmir

Parents Take Note! Most Picky Eaters Do Not Grow Out Of The Habit Easily: Study
2020-05-29