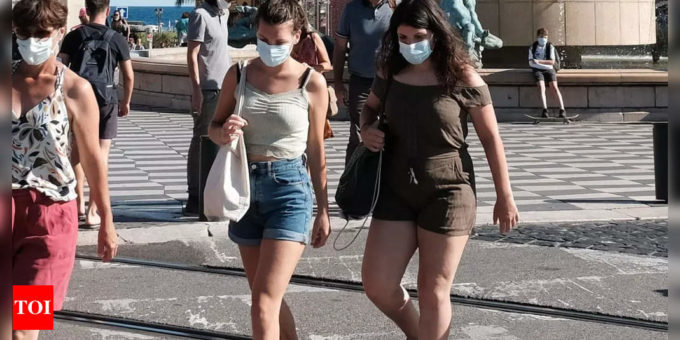 ATHENS: Greece on Thursday said face masks would be compulsory both indoors and outside to limit the spread of the coronavirus during Christmas and New Year’s gatherings.
More than 20,000 people have died of the virus with over 600 currently in intensive care. The government has resisted calls from health experts for additional safeguards and mobility restrictions, even among the vaccinated.
“There is major mobility during the festive season and large crowds gather outdoors,” Health Minister Thanos Plevris told reporters.
“As of 0400 GMT on Friday masks will be compulsory in all indoor and outdoor areas,” he said, adding that the measure would remain in force until at least January 2.
All public Christmas and New Year’s festivities have been cancelled and incoming travellers have been urged to test themselves on the second and fourth day after arrival, the minister added.
Additional restrictions on entertainment, sport and remote work will be announced in the coming days for the period following January 3, Plevris said.
“It’s not just coronavirus that is dangerous in life. Bankruptcy is dangerous too, so is unemployment,” Development Minister Adonis Georgiadis told Mega TV this week.
Though over 16.5 million vaccinations have been carried out, including nearly 3.0 million booster jabs, authorities have had trouble persuading Greeks over 60 to take the jab.
A monthly fine of 100 euros ($113) has been imposed to persuade the elderly to take at least one vaccine shot by mid-January.

Netlicks? 'The TV screen you can taste’