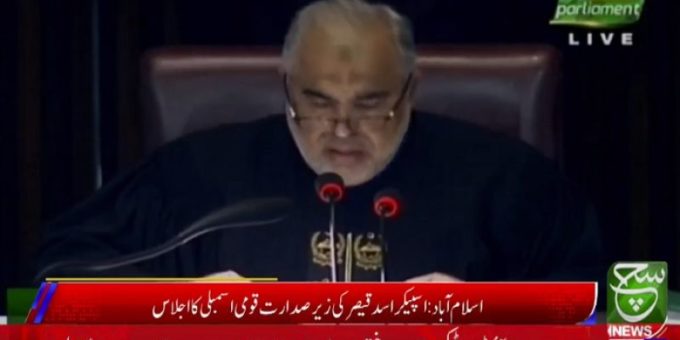 Federal Minister for Finance Shaukat Tarin presents the much-awaited supplementary finance bill — termed by the Opposition as a “mini-budget” — in the National Assembly, as a pre-requisite to resume the $6 billion External Fund Facility (EFF) of the International Monetary Fund (IMF).

The opposition staged a vehement protest and chanted slogans to prevent Shaukat Tarin from introducing the Finance Bill 2021 and SBP Amendment Bill in the House.

According to the finance ministry’s proposal, the government will impose a tax on approximately 150 goods at a rate of 17%. Therefore, goods that were currently either completely exempt from General Sales Tax (GST) or being taxed at 5% to 12% rates would now be taxed at 17%.

The income tax rate on mobile phone calls is expected to increase from 10% to 15%.

Meanwhile, the GST rate on cars above 850cc will go up to 17% and the tax on the import of electric vehicles in CBU conditions will increase from 5% to 17%. Business to business transactions will go up from 16.9% to 17%.

Zero-rating available on supplies of raw materials for imported milk would be withdrawn and be taxed at 17%.

The finance bill also proposes that bread prepared in bakeries, restaurants, food chains and shops be taxed at a 17% rate.

The bill increases the tax collection target from Rs5,829 billion to Rs6,100 billion for the remaining financial year. The government has also reduced the development programmes by Rs200 billion.

The “mini-budget” was one of the conditions of the IMF which was to be met before January 12, 2022, in order to recover more than $1 billion in instalments from the Fund.

Earlier, Prime Minister Imran Khan had summoned a federal cabinet meeting to approve the Finance Bill, which was later to be presented in the National Assembly.