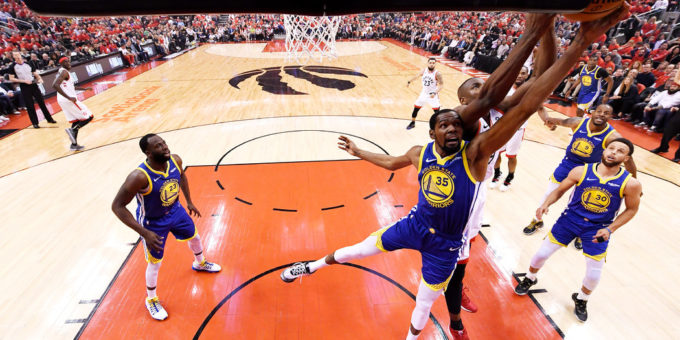 Kevin Durant of the Golden State Warriors announced on Instagram that he underwent successful surgery Wednesday to repair the Achilles’ tendon in his right leg that had ruptured two days earlier during Game 5 of the N.B.A. finals.

Durant played in the game Monday night in Toronto after missing the previous nine playoff games with a calf injury. In his Instagram post, Durant said he was “hurting deeply, but I’m OK.”

“Basketball is my biggest love and I wanted to be out there that night because that’s what I do,” he wrote. “I wanted to help my teammates on our quest for the three peat.”

The Warriors confirmed the injury and surgery a few hours after Durant’s post, but have not yet released an official timetable for Durant’s recovery. Eight months is typically regarded as the fastest an N.B.A. player can return from one of the sport’s most dreaded injuries; DeMarcus Cousins, Durant’s Warriors teammate, needed almost a full year to recover from an Achilles’ rupture in January 2018.

The Warriors have been heavily criticized for clearing Durant for Game 5 after a 32-day absence.

Bob Myers, Golden State’s president of basketball of operations, said after the injury that it had been a collaborative decision — informed by medical opinions from inside and outside the organization — but Myers ultimately invited the news media to “blame me.”

On Wednesday, before Durant’s announcement, Warriors Coach Steve Kerr said: “I completely understand the world we live in. As Bob mentioned the other night, there’s going to be blame. There’s going to be finger-pointing. We understand that, and we accept that. This is kind of what you sign up for when you get into coaching, general management, in the N.B.A.”

After averaging 26.0 points, 6.4 rebounds and 5.9 assists per game this season, Durant strained his right calf May 8 in Game 5 of Golden State’s second-round series against the Houston Rockets. Kerr acknowledged that the Warriors wish they could change the decision to clear Durant but said “that’s easy to say after the results.”

Durant started Monday night in Toronto, jumped center and made his first three 3-pointers in scoring 11 points in the first quarter. But he suffered the non-contact Achilles’ injury early in the second quarter while attacking the Raptors’ Serge Ibaka on the dribble from beyond the 3-point line on the right wing.

Durant immediately surrendered his dribble when he felt his right calf convulse and quickly fell to the ground in a sitting position, clutching his lower right leg. He was ushered to the visitors’ locker room at Scotiabank Arena by Dr. Rick Celebrini, Golden State’s director of sports medicine and performance, and his teammates Andre Iguodala and Stephen Curry.

Durant, who turns 31 in September, has until June 29 to decide whether to invoke next season’s $31.5 million player option with the Warriors or become a free agent July 1, as he has long planned to do. Teams such as the Knicks, Nets and Los Angeles Clippers are expected to pursue Durant if he chooses free agency.

“It’s just the way things go in this game and I’m proud that I gave it all I physically could, and I’m proud my brothers got the W,” Durant wrote on Instagram of Golden State’s Game 5 win after his exit. “It’s going to be a journey but I’m built for this. I’m a hooper.”

Egypt tries to retrieve head of Tutankhamun from London auctioneers