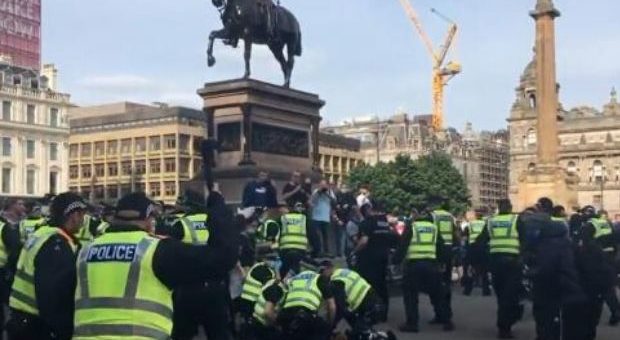 Six people have been arrested so far after the Loyalist Defence League disrupted a protest by the No Evictions Group in George Square.

No Evictions Network attended the square to protest the treatment of asylum seekers by their accommodation provider Mears.

READ MORE: Scottish Protestants Against Discrimination hits out at Nicola Sturgeon for reaction to Loyalist violence in Glasgow

The ugly scenes have been called “disgraceful” by First Minister Nicola Sturgeon while leading lawyer Aamer Anwar hit out at the far right thugs.

Disgraceful scenes in Glasgow tonight. Racist thugs shame Scotland. If they break the law, they should face the full force of it. And all of us should unite to say that welcoming refugees and asylum seekers is part of who we are. https://t.co/YL7M4YVhLN

Police have made a number of arrests already and will continue to take all necessary action against those responsible.

They come once again to defend statues? Shouting ‘Fenian Bastards’, singing ‘Rule Brittania’ whilst attacking asylum seekers protesting their living conditions – these are our streets, these Far-Right racist thugs cannot be allowed to do this pic.twitter.com/cEx5xRjKqX

The bigotry on display in Glasgow this evening has no place in a tolerant, open society and must be condemned. https://t.co/M0Sfx7Enle

#GeorgeSquare tonight has been utterly shameful. Anyone trying to say it was caused by people protecting the cenotaph are condoning and encouraging racism. These people are bigoted racists, and it makes me ashamed that it has happened in my home city. We are better than this.

Shocked to see the scenes earlier tonight in Glasgow.

Neither racism nor bigotry have any place in the Scotland in which we all aspire to live.

I said this in my @Glasgow_Times column today. I’m sickened that I’m having to repeat it so soon. Peacefully protesting asylum seekers, some of our most vulnerable residents, were attacked by racists tonight. Glasgow has stood against fascism before & the city will do so again. pic.twitter.com/e9BP557d5a

Someone might have been thoughtful enough to mention that the refugees aren’t from Ireland and it isn’t 200 years ago… https://t.co/cDOetakQgb

The scenes we seen this evening in George Square have been absolutely appalling and do not reflect the Glasgow I know and love.

Any form of bigotry, vandalism or violence has no place in our city.

I am shocked and appalled at the scenes we have witnessed tonight in my home city.

There is absolutely no place for racism, bigotry or violence in Scotland.

Glasgow Times gets it right. pic.twitter.com/NWcI0NbQu6

This was never about statues. Let’s be clear – tonight’s actions at George Square were driven by sheer racism. It has no place in this city. It has no place in the world. @no_evictions were having a peaceful protest about a serious issue & it was hijacked by thugs. Shameful. https://t.co/6ipqoaD9S9