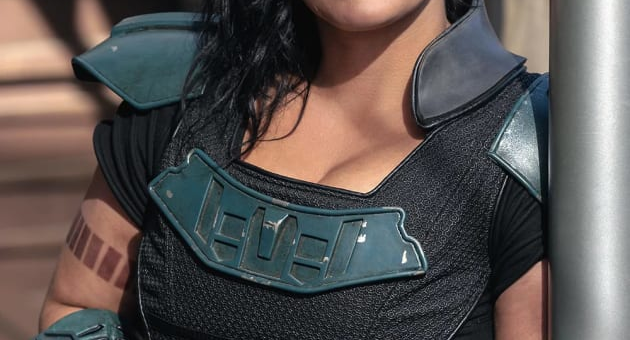 Since its premiere on Disney+ in November of 2019, The Mandalorian has received well-deserved praise.


But one character who was initially well-received by fans — Cara Dune — lost fans quickly due to the online bigotry of her actress.


Gina Carano spent months showing public support for racism, transphobia, and even the January 6 attack on the Capitol.


This week, when she compared conservative accountability to the persecution of Jews during the Holocaust, Disney and Lucasfilm had enough.


The Mandalorian fans have been calling for Gina Carano’s firing for months after she repeatedly doubled down on her awful social media activity.


For the most part, she played it “safe” — using her public Twitter likes to show her support for the worst dregs of humanity rather than using her own words to express bigotry. Mostly.


But it was on her Instagram Stories this week that Gina ignited a firestorm of justified outrage.


There’s a good guideline to follow when comparing literally anything to the Transatlantic Slave Trade, and the same rule goes for comparing things to the Holocaust: don’t.


Gina shared a post that read: “most people today don’t realize that to get to the point where Nazi soldiers could easily round up thousands of Jews, the government first made their own neighbors hate them simply for being Jews.”


The absolutely awful post then asked: “How is that any different from hating someone for their political views?”


There is a simple answer to that question, but it was not asked in good faith and does not deserve a good faith answer.


(Besides, “political views” in this case acts as a euphemism — hating people for who they are is bigotry, not an “opinion”)


“Gina Carano is not currently employed by Lucasfilm,” the statement began, “and there are no plans for her to be in the future.”


“Nevertheless, her social media posts denigrating people based on their cultural and religious identities are abhorrent and unacceptable,” Lucasfilm affirmed.


To say that thousands immediately celebrated on social media would be an understatement.


Countless The Mandalorian fans had been asking Lucasfilm and Disney to take this step for months.


In fact, the images of baby Grogu Force-choking Gina’s character, Cara Dune, had become a sort of rallying cry as her transphobic and otherwise awful posts came to light.


The Mandalorian has a very devoted fanbase on social media — one that became even more active during the COVID-19 pandemic.


At one point, her mockery of the trans community was so bad that the show’s lead, Pedro Pascal, spoke to her about it — Pedro himself of course has a trans sister, Lux.


Now, fans are celebrating — though some note that the character of Cara Dune was the antithesis of everything that Gina represents.


While it seems likely that Cara will simply not return to the show and only continue in written media like books and comics if at all, fans have suggested recasting.


Lucy Lawless and Lana Parilla’s names have been floated by fans, though again, it seems likely that Lucasfilm and Disney will opt to simply move on.


Of course, not everyone is celebrating. Gina had diehard fans, seemingly made up entirely of ragebait YouTubers who supported her solely for her bigotry.


In fact, some of those currently crying foul were the exact same people who decried the character of Cara — a formidable warrior — as “SJW woke feminism” and other words that instantly make awful people’s blood boil.


It seems that they only liked the character after learning that the actress was a horrible person. That’s … not a great way to build a fanbase, Gina.

Ek Villain Returns to be released on this day

Priya Aggarwal: The Indian bride on horseback who smashed taboos
2022-02-27