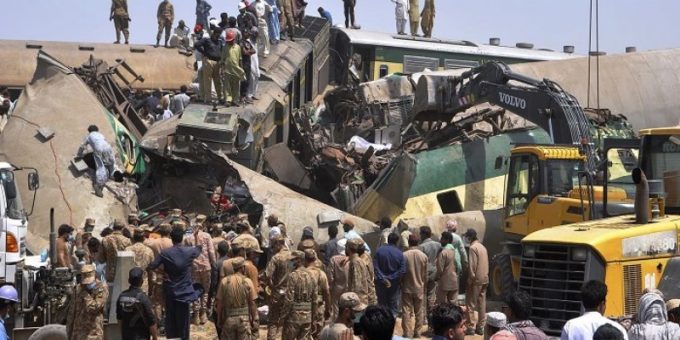 At least 50 people lost their lives and 70 others sustained injuries as Sir Syed Express train collided with a Millat Express between Reti and Daharki railway stations in Ghotki.

According to the railways’ officials, the accident occurred when a Sargodha-bound Sir Syed Express collided with a Millat Express that was already present at the track after the derailment, said sources.

As many as 14 boogies of both the trains were damaged out of which four were completely destroyed.

DC Ghotki, Usman Abdullah confirmed the death of at least 50 passengers and added that over 70 people sustained injuries. Getting the information about the incident, the police and rescue teams reached the spot for the rescue and relief operation.

DC Usman Abdullah said heavy machinery and cutters are required for the operation. Following the major train accident, up and down railway traffic has been suspended.

The driver of the ill-fated Sir Syed Express train, Aijaz Shah said he was rescued by the local after two hours of the collision.

Detailing the train incident, the engine driver said the train was running at its normal speed after leaving Reti station and later he suddenly saw the derailed bogies of Millat Express train at the track.

Due to the short distance the train rams into the derailed bogies of Millat Express.

A military doctor and paramedics, along with ambulances, moved from Pannu Aqil has also reached the incident site, the ISPR statement read.

It said that engineer resources have been moved to carry out necessary relief and rescue work. The army s special engineer team Urban Search and Rescue is being heli-lifted from Rawalpindi to the crash site to speed up relief and rescue efforts.

The process of identification of the injured is underway, said the hospital administration.

80 Crore To Get Free Ration Till Diwali: PM Modi

Sidharth Malhotra on marriage: Love or arranged, I believe in the institution and haven’t ruled out the possibility of it
2019-07-29