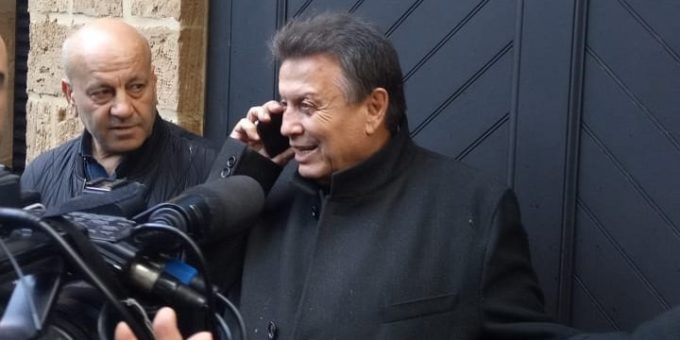 It was a busy day at the pink-painted Nissan-owned private residence in Beirut’s upmarket Achrafieh neighborhood, where Carlos Ghosn, Japan’s most wanted fugitive, was thought to have taken refuge after fleeing the country “Mission: Impossible” style.

The Thursday morning peace in the normally sedate Rue du Liban (Lebanon Street) was shattered by the Lebanese justice minister’s statement that Interpol had issued a red notice against Ghosn, a direct request for the Lebanese authorities to detain and interrogate him and/or temporarily hold him until Interpol could quiz him.

By law, Lebanon has to temporarily hold and question Ghosn, but does not have to hand him over to Interpol or to extradite him anywhere. In fact, Lebanon has never extradited any of its citizens, opting for trial in their homeland under Lebanese laws.

In Lebanon, Ghosn is a free citizen, presumed innocent until proven guilty according to the law, and there are no criminal proceedings against him internally.

Japan, as well as France, each building a criminal case against Ghosn, may well be asking the Lebanese government to extradite him to be tried for alleged financial misconduct including accusations of using company assets for personal benefit, and tax evasion.

Ghosn, the former chief of Nissan and Renault, or at least his family, are currently squatting at a house owned by Nissan, the company that cut him off and helped construct the legal case against him in Japan.

Contractually, Ghosn and his family had the right to stay at the company-owned property while he worked there. After being ousted, Nissan launched legal moves to have Ghosn and other occupants, namely his in-laws, removed from the premises.

However, Carol Nahas, Ghosn’s second wife, succeeded in receiving a court order last year, shortly before her husband was ousted, allowing her to stay in the house since his trial was yet to be determined in Japan. That was, until he fled.

Nissan’s lawyer, Sakher Hachem, told Arab News Japan that there “will be a hearing on Jan. 13 to determine the legality of the Ghosn family’s presence.”

Hachem added: “He is no longer part of the company, so he is not entitled to stay in a company-owned asset.”

No matter what the case is, the Ghosn’s presence in Nissan’s house is perhaps the utmost provocation that the “cost killer” had dealt to the company since it cut him off.

Nissan had long assigned a security company to monitor the house, which Nahas had lavishly decorated with Nissan money, purportedly splashing out as much as $6 million on furniture and renovation work, and a whopping $74,000 for two magnificent chandeliers. The house was originally bought for $8.8 million. It is believed that the security is not to keep the residents safe, but rather to prevent any of the prized items being removed from the house.

Dozens of foreign and local reporters and television channels have been camped on the tight street’s sidewalks braving cold rain to monitor the comings and goings at the three-storey villa.

Nahas, who is believed to have been the cause of his changed lifestyle to a lavish spender over the past couple of years, arrived at the house on Thursday morning in a rented vehicle, a GMC, not a Nissan.

Shortly after, an unknown man spent less than half-an-hour at the property telling reporters as he left that he was a “general health doctor” who had visited “to check on Carol’s son.”

An hour later, Mario Saradar, president and CEO of Saradar Group, entered the house. Ghosn is a shareholder in the group (a family-owned business which has been at the center of Lebanese banking for more than 60 years) with a stake of nearly 4.6 percent.

Ghosn is believed to be staying at a friend’s house nearby. So far, he has evaded the Japanese authorities since pulling his Hollywood-style stunt to flee the country.

Meanwhile, Ghosn is expected to hold a press conference on Jan. 8 after being denied the opportunity while in Japan.

ZEE5 to continue reigning the OTT space in 2020. Unveils January calendar with a slew of fantastic content