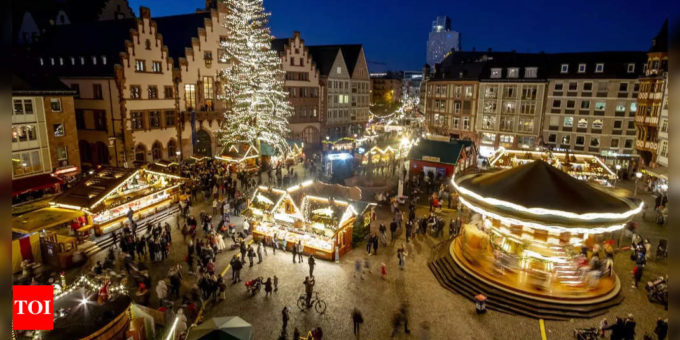 BERLIN: Germany’s leaders are set to decide on new restrictions to come in after Christmas aimed at slowing the spread of the new Omicron variant of Covid-19, but plans so far fall short of a full lockdown.
Chancellor Olaf Scholz and Germany’s 16 state governors plan to consult later Tuesday after the government’s new panel of experts called for action to be taken within days and said that nationwide measures are needed, “in particular well-planned and well-communicated contact restrictions.”
Officials have said that night clubs likely will be closed regardless of local infection rates, on which closures currently depend. There are likely to be further restrictions on crowds at major events, while new contact restrictions are expected to be introduced for vaccinated people – with gatherings reportedly to be capped at 10 people.
Restrictions already in place target mainly the unvaccinated, with proof of vaccination or recovery required to enter nonessential stores among other things.
Authorities have scrambled to speed up a booster campaign, with an average of around a million vaccine shots administered per day over the past week, the highest level of the pandemic so far. But they remain dissatisfied with the number of people who have been vaccinated in the first place – the proportion of the population that has received a full first round of vaccine stands at 70.3%, short of the minimum 75% the government aimed for.
Germany’s infection rate is, for now, drifting downward slowly. On Tuesday, the national disease control center recorded 306.4 new cases per 100,000 residents over the past seven days, down from 375 a week earlier, with 23,428 cases reported over the past 24 hours.
However, health minister Karl Lauterbach has warned that Germany faces “a massive fifth wave” because of omicron, which he says can’t realistically be prevented. All the same, he said on Sunday that there won’t be a lockdown before Christmas.
The disease control center, the Robert Koch Institute, said Monday that people who have recovered or had a full first round of vaccine now face a “high” risk of infection, while it is “moderate” for those who have received a booster. It said the risk is “very high” for the unvaccinated.

Pakistani Actresses Nominated For 100 Most Beautiful Faces In The World