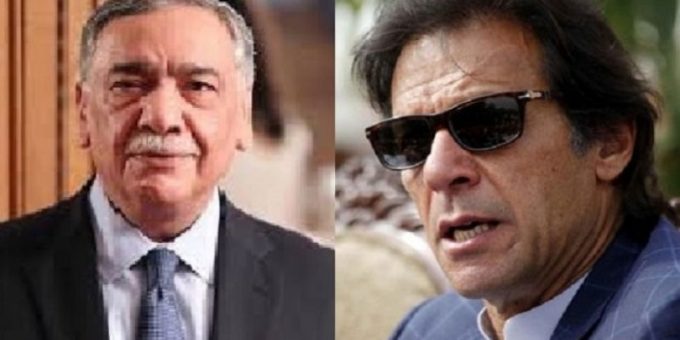 The federal law minister Farogh Naseem, who resigned from his post on Tuesday after the court took up the case, in order to represent the army chief, submitted his power of attorney on arrival to the courtroom today.

The court then told the attorney general that according to him, any retired general can be made the chief of army staff.

“An army chief is appointed by the president on the prime minister’s advice,” said Justice Mansoor. “If the government can’t appoint an army chief, how can it extend his tenure?”

In response to a question from Justice Mansoor, the attorney general said that the army chief will retire tomorrow night (Thursday).

“You have made the army chief a shuttlecock,” said Justice Khosa.

During Wednesday’s hearing, the chief justice asked Attorney General Anwar Mansoor Khan if the government had accepted the points raised by the court yesterday. To this, the attorney general replied that they have not accepted the mistake.

Commenting in the courtroom, the CJP remarked they will hear everyone as it is an important issue, adding that earlier this question was never raised and now that it has been brought forward, all the legal aspects of will be reviewed.

We are not in a hurry, the CJP observed.

Justice Khosa stated that in the past, five or six generals had their tenures extended by themselves and no one questioned them.

While commenting on the attorney general’s reliance on Article 255, the chief justice remarked that the rule applies to officers and not the army chief.

The chief justice further clarified that the media has understood the case incorrectly. “This is not a suo motu case. We are hearing the petition filed by Advocate Riaz Hanif,” Chief Justice Khosa said.

The chief justice then asked the attorney general to present the summary approved by the federal cabinet in its meeting on Tuesday, which he did.

“I informed the court yesterday as well that we are still waiting for some federal ministers to respond to the extension notification,” the attorney general replied.

“If there is no answer till now, should we assume the answer is yes?” the CJP asked.

To this AG Khan responded that as per the law, that would be correct.

The top judge then said that this course of action is only acceptable when the answer has to be given within a certain time period. “If this was an open mandate we would have let it go. The cabinet has accepted the mistakes that we pointed out,” he added.

The attorney general then submitted the documents pertaining to yesterday’s decisions by the federal cabinet to the court.

The court then adjourned the hearing till 1pm.

After the resumption of the hearing after the break, CJP Khosa remarked that it would be better if the court reviews the Army Act and rules to understand the legal point of view behind the appointment of the army chief.

Justice Mansoor Ali Shah asked if under Article 243 a retired individual can be appointed as the army chief. To this, the attorney general replied that the army chief has been appointed under the 1975 convention.

Justice Shah then stated that there was clarity that the prime minster has the right to appoint an army chief. He told the attorney general that the problem could be resolved if a clear answer was given whether a retired army chief can be re-appointed or not.

The CJP remarked that an army officer takes oath that he will give his life if it comes to it, adding that this was a big thing. He also said that the oath also says “I will not get myself involved in any political matters”, which is also a good thing if followed.

Justice Shah then inquired if there was mention of the years of service of any officer in the Army Act?

To this the attorney general told the court the terms for employment were mentioned in the rules, not in the Army Act.

To this the AG Khan said there was no mention of any period.

Justice Khosa further remarked that COAS is also an adviser to the government on military affairs. He is also responsible for discipline in the army. “We are looking into all the regulations,” he added.

The CJP asked General Bajwa’s lawyer, Farogh Naseem, if the army chief will retire tomorrow (on Thursday), adding that according to the AG’ a general never retires’.

“In your opinion, can a former army chief also be appointed as COAS?” the SC CJP said.

“As per the attorney general and the definition of article 243, even he [the AG] can appoint the army chief” Justice Mansoor Ali Shah remarked. If the federal government doesn’t appoint an army chief, how can it grant him an extension, Justice Shah opined.

“If the duration/tenure is over, does that mean that the army chief can be considered retired?” To which the attorney general replied that there was no age limit to a general’s retirement.

“That means that any retired military officer can be appointed army chief,” observed Justice Shah. “Where does it say that a COAS has to be from the army?”

“Then this case must be decided on an urgent basis,” said the CJP.

On Tuesday, the federal cabinet met twice and reviewed the situation arising out of the Supreme Court’s order, which suspended the notification extending the tenure of the army chief.

The cabinet, in its second meeting, amended Rule 255 of the Army Regulation. It then prepared a new summary for the extension and sent it to President Arif Alvi for approval.

During today’s hearing, the court noted that the prime minister had on his own passed an order reappointing the current chief of army staff for a second term on August 19, whereas under Article 243 of the constitution, it is the president who is the appointing authority.

Suspension of the notification

The government on August 19 had reappointment General Bajwa, extending his tenure for three years, citing the “regional security environment”. However, on Tuesday, the supreme court suspended the notification and issued notices to the federal government, General Bajwa through the Ministry of Defense and the Ministry of Law.

The court made the army chief a respondent to the petition and held that the operation of the impugned order/notification in respect of extension/re-appointment of General Bajwa for another term in the said office will remain suspended.

The attorney general had admitted in court that according to Regulation No 255 of the Army Regulations (Rules), the retirement of an army officer can temporarily be suspended or limited. The court, however, observed that a bare perusal of Regulation No 255 prima facie shows that the said provision can be invoked after an officer has already retired from service.

The court also observed that after the approval of the cabinet, regarding extension/re-appointment of the incumbent chief of army staff, the matter was never sent to the prime minister or the president again for fresh advice.