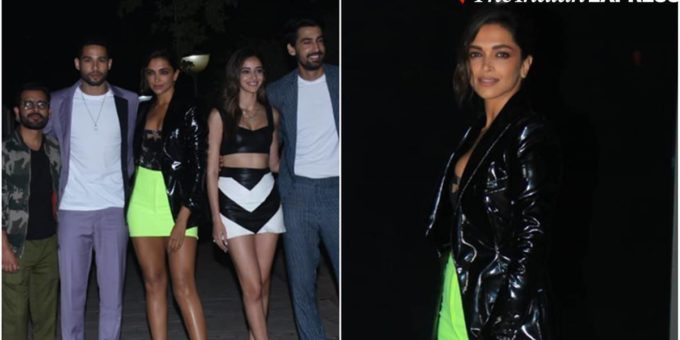 The makers of Gehraiyaan hosted a special screening of the film in Mumbai, which was attended by the who’s who of the entertainment industry. Deepika Padukone, Siddhant Chaturvedi, Ananya Panday, Shakun Batra, Dhairya Karwa, Chunky Panday, Kapil Sharma, Soni Razdan and Vijay Varma among others made their presence felt at the screening. Ranveer Singh, meanwhile, was fashionably late to the event.

Earlier in an interaction, Deepika had spoken about Ranveer’s reaction to Gehraiyaan. She told indianexpress.com that Ranveer said Gehraiyaan is her most intense film post Tamasha.

Deepika Padukone also spoke about Ranveer’s support which enables her to take on challenging and bold films. “I think because I have a cheerleader in him, I am able to make bolder choices,” she told indianexpress.com. Talking about the film, Deepika said that Gehraiyaan is her “most memorable experience.” The actor, who plays Alisha in the movie, described her character as someone “who is keen on living a better life and at the same time, she carries a lot of anxiety and baggage of the past.”

Check out photos from the screening of Gehraiyaan:

The cast of Gehraiyaan posed for photographers ahead of the screening. (Photo: Varinder Chawla)

Kapil Sharma arrived with his wife Ginni for the screening of Gehraiyaan. (Photo: Varinder Chawla)

In Gehraiyaan, Deepika Padukone shares screen space with Siddhant Chaturvedi. Interestingly, Siddhant has worked with Ranveer Singh in Gully Boy. Apart from Ranveer, Siddhant’s parents also watched their son’s film ahead of its release and were impressed with it.

In a recent interaction with ETimes, Siddhant revealed how he didn’t talk to his parents on the day of the screening as he wanted the day to “just pass”. He revealed that his father told him, “Yeh film samaaj ka darpan hai. Ismay kuch sahi galat nahi hai. (It holds a mirror to the society. There is nothing right or wrong in it.). Koi message nahi de rahe hai. (It’s not giving any message.)”

Sonu Sood rescues the life of a 19-year-old boy caught in a severe accident : Bollywood News