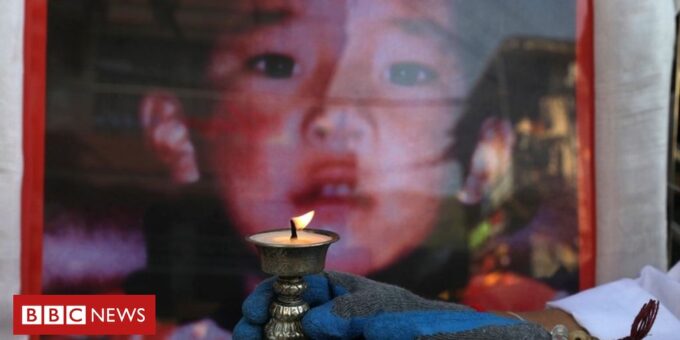 There is only one photograph in circulation of the Tibetan Gedhun Choekyi Niyima, one of the world’s most famous “disappeared” persons.

It is little more than a snapshot, taken when he was just six years old. It shows a boy with rosy cheeks and an impassive look on his face.

That boy is now 31, and 17 May marks exactly 25 years since he and his family were disappeared by China, three days after he was identified as the reincarnated Panchen Lama, the second most important figure in Tibetan Buddhism.

Since he was taken, there has been no independent news on his fate.

Tibetans outside China are using the anniversary to call for his release. But only Chinese officials know where he is and, having said little for a quarter of a century, there is little expectation that they will offer new information now.

For those who want the Panchen Lama freed, it is an understandable position. The case shows the power wielded by China’s leaders, who can make someone vanish completely with few consequences for either themselves or their country.

The UN Working Group on Enforced or Involuntary Disappearances has been trying to find out what has happened to Gedhun Choekyi Niyima since 1995, but it has discovered very little.

A few weeks before the 25th anniversary of his disappearance, it gave the BBC this statement about its efforts.

“The Government of China has responded several times, but the information provided was considered insufficient to clarify the case and it remains outstanding.”

In 2013, the working group asked the Chinese government to allow it to visit the country.

In its annual report last year – six years after that request – it said it was still waiting for an answer.

“The working group hopes that a positive reply will be received soon,” the report noted, perhaps a little optimistically.

Although Beijing is saying little, there are reasons why China might have wanted this particular six-year-old boy to disappear.

In Tibetan Buddhism, the Panchen Lama is outranked only by the Dalai Lama, who fled Tibet in 1959 and became an alternative source of power for Tibetans who resented Beijing’s control of the Himalayan region.

It has been suggested, reasonably, that China did not want the Panchen Lama gaining the same authority and becoming a similar obstacle to its governance of Tibet.

After Gedhun Choekyi Niyima vanished, China chose its own Panchen Lama. Many believe it will also choose its own Dalai Lama when the current one dies.

Down the years, the Chinese government has provided some information about the missing Panchen Lama, even if it was just to deny anything was wrong.

Immediately after his disappearance, it told the UN working group that “there has never been a case of disappearance and kidnapping of the family of the reincarnated child”.

It said the claim was a fabrication dreamt up by the “Dalai Lama group”.

The following year, 1996, the story changed. China said a few “unscrupulous souls” had tried to smuggle the boy abroad and so his parents had asked for protection, which it was supplying.

Despite the security, Beijing said the boy and his family were living normal lives and did not want anyone to bother them, something it has repeated often since then.

Occasionally, the Chinese government offered a glimpse that not all was well.

In 1998, it told the working group that the Panchen Lama’s mother was serving a prison sentence, although it is not clear what for or how long she was incarcerated.

At times there have been other sources of news.

In 2000, Robin Cook, then the British foreign secretary, said China had shown UK officials two photographs of a boy it said was the missing Panchen Lama.

One showed a child playing table tennis; in the other the boy was writing Chinese characters on a blackboard. The British were allowed to see the pictures, but not keep them.

In another encounter, Tibetan officials told me, on a reporting trip to Tibet in 2007, that the missing Panchen Lama would like to live in peace and does not want to be disturbed.

The last firm news, according to the Tibetan government-in-exile, based in Dharamsala in India, came two years ago when China told the UN that the Panchen Lama was living an ordinary life and had a job.

The Chinese government declined to update that information for this article.

‘They took him and his family’

Professor Jeremy Sarkin, who served on the UN working group from 2008-20014, said China had clearly disappeared the Panchen Lama in contravention of UN human rights rules.

“The words the Chinese use do not refute reality. They took him and his family,” he said. “We should be allowed to check he is safe.”

The fact that China shies away from openly admitting what it has done is not unusual, said the professor, now at the Nova University of Lisbon. “No state wants to acknowledge they disappear people.”

But Mr Sarkin said there was little anyone could do about the disappearance – and little pressure to try.

Robert Barnett, who has long followed Tibetan affairs, said China’s repressive policies in Tibet had the support of most of its citizens.

“China hasn’t succeeded in winning Tibetans over, but that doesn’t matter if 1.4 billion Chinese people believe you are right,” said the expert, now at the School of Oriental and African Studies in London.

But he said Chinese leaders would never be able to relax and enjoy their power in Tibet.

“It’s a fragile construction. They will spend the entire time living in fear that the whole system might collapse.”

That might be so, but it is testament to just how securely China controls Tibet that the Tibetan government-in-exile has rarely been able to use its own sources to get news of Gedhun Choekyi Niyima.

Two years ago, the Dalai Lama said he had “reliable information” that he was still alive, but there has been nothing since.

Sonam Tsering Frasi, the Tibetan government-in-exile’s representative in London, said they could do little more than hold on to that one photograph of the six-year-old boy.

Mr Frasi said it is hung up by Tibetans in monasteries and homes outside China; the focus of prayers and reverence, and of the hope that one day they will get to see the man he grew up to be.