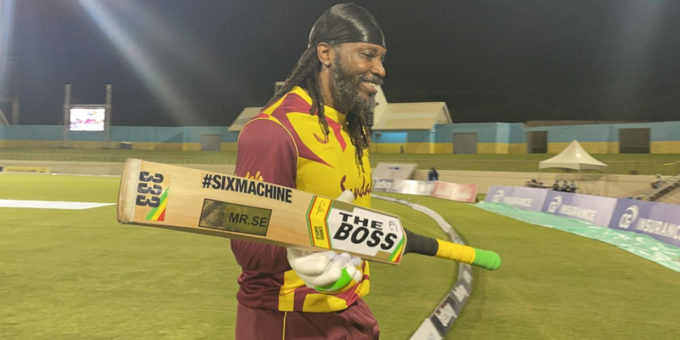 Chris Gayle
half-century blasted the West Indies to victory over Australia in St Lucia on
Monday, clinching the five-match T20 series between the sides.

Chasing a modest target of 142, Gayle recaptured his most
destructive form in racing to 67 off only 38 balls to take his team to the
target with five overs to spare at the Daren Sammy Stadium.

By spearheading the West Indies to an insurmountable 3-0
lead in the series, the 41-year-old also sent an ominous warning that he could
yet be a factor in the Caribbean side’s defence of the World T20 title later
this year.

Gayle’s pyrotechnics followed another efficient West Indies
performance in the field as wrist-spinner Hayden Walsh again presented the most
effective challenge to the Australians with figures of two for 18 in limiting
the visitors to 141 for six.

All-rounder Moises Henriques topscored with 33 and struck
the only two sixes of his team’s innings.

However, the tempo of the innings dropped considerably when
they were separated by Obed McCoy in what proved to be the seamer’s only over
of the innings.

‘I still have it’

Mitchell Marsh fell cheaply for the first time in the series
and when Walsh accounted for Alex Carey and Finch in the same over, their hopes
of a first formidable total of this campaign effectively came to an end given
the relative inexperience of their batting line-up.

Walsh should have claimed a third wicket but stand-in
captain Nicholas Pooran missed a straightforward stumping offered by Henriques
who managed to make some use of the reprieve.

Yet all of that effort was put into proper context by
Gayle’s muscular performance — his first T20 international half-century in six
years, with seven sixes and four fours.

Fully aware of all the speculation off the field as to his
value to the team, he went after the Australian bowlers not long after arriving
at the crease in the opening over when Mitchell Starc dismissed Andre Fletcher.

Ariana honeymoons in the Netherlands with Dalton Gomez

Monsoon Diet: Pair Your Evening Tea With Chhole Tikki To Enjoy The Rains With Family
2019-07-11