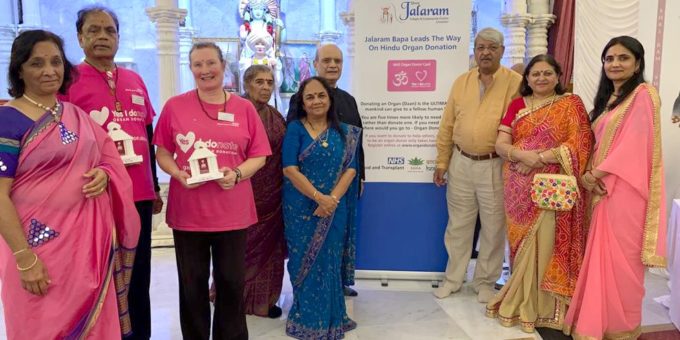 Five organisations working with the Hindu and Jain communities are joining the campaign to address the urgent need for more lifesaving organ donors from black, Asian, mixed race and minority ethnic backgrounds.

They are launching projects to break down myths and increase support for donation and ensure that people know that the law in England is changing next spring and understand their choices.

They are among 26 faith and community-based organisations to have secured funding to educate communities about donation after death through the BAME Community Investment Scheme led by NHS Blood and Transplant.

The scheme is part of a Government-funded campaign to address the critical shortage of organ donors from black, Asian, mixed race and minority ethnic backgrounds.

The Jain Network project titled ‘Give a Gift – Pass it On’ aims to engage the Jain community in north west London through working with stakeholders and encouraging discussion through events and groups.

The Oshwal Association of the UK (OAUK) will use the funding to raise awareness of organ donation in the Jain community in Bedfordshire, Northamptonshire and the Midlands. Activity will include training volunteers, holding events and creating a Gujarati language play.

The project led by Veerayatan UK will focus on the Jain community in London, Leicester and Hertfordshire. It will involve training young people as organ donation champions, hosting cultural events and distributing leaflets.

The Vanik Council UK will use the funding to expand its ‘Give a Gift, Give an Organ’ project, engaging the Jain community in key regions in England with conferences involving key figures in organ donation.

Jalaram Charitable Trust will use the funding to engage young Hindus in Leicester in organ donation by producing a play that will be performed at events and in local cultural and arts spaces.

Pramod Thakkar, Chairman of Trust Board for Jalaram Charitable Trust, said: “Ang Daan – organ donation – is a part of Seva in which every Hindu should participate. May I urge all Hindus to the call for organ donation? Come join us in this service to mankind.”

Bharat Patel, organ recipient and project lead, said: “I felt like a baby being born again with a brand new life ahead of me. Never could I even dream that such a change in a human lifestyle could ever be possible.

“Ten years on, my donated kidney is working absolutely fine and functions the same as when first transplanted. Transplantation works.”

As well as promoting donation, each project will have an important role to play in building awareness and understanding of the upcoming law change as well as ensuring that people make their donation decision upon the facts.

From spring 2020 all adults in England will be considered as having agreed to donate their organs when they die unless they record a decision not to donate, known as ‘opt out’, or are in one of the groups not covered by the new law.

An opt out system for organ donation was introduced in Wales in December 2015 and in Jersey in July this year and will also be introduced in Scotland in autumn 2020. Families will still always be involved in organ donation, so it is vital that they know your choice.

Caroline Dinenage, Minister for Care, said: ‘It is fantastic that more people from black, Asian and minority ethnic backgrounds are considering organ donation than ever before. But it is a distressing fact that people from these communities are less likely to get a transplant than if they were white.

“We all have a role to play – the government, communities, families and friends – in breaking down the myths and perceived barriers that surround organ donation. I am delighted to see the projects that will be delivering this vital work as part of our Community Investment Scheme and how they will change attitudes and save lives.”

The Community Investment Scheme was open to any faith or community-based organisation working within black, Asian, mixed race and minority ethnic communities in England and Wales.

Organisations were invited to bid by outlining how their project could positively engage their community in organ donation. All applications were reviewed by an independent judging panel.

This is the second round of the scheme. A progress report covering the first round projects is currently being developed and will be shared with stakeholders in the new year.

Millie Banerjee, Chairman of NHS Blood and Transplant, said: “We know that trusted, community-led or local organisations can make a real difference in dispelling myths, overcoming barriers and changing attitudes to organ donation.

“These innovative new projects will build on the inspiring work of those funded under round one of the scheme, bringing a positive organ donation message to an even broader spectrum of faiths and communities.

“This passion for saving lives will, I hope, encourage more people from black, Asian, mixed race and minority ethnic backgrounds to decide they want to be an organ donor and share that decision with their families.”

The National BAME Transplant Alliance (NBTA) is supporting NHS Blood and Transplant in the campaign to address the need for black, Asian, mixed race and minority ethnic donors, which was launched in summer 2018.

Kirit Modi, Hon President of the NBTA, said: “NBTA is very pleased that 26 new projects to inform black, Asian, mixed race and minority ethnic communities about the change in law and increase donors from these backgrounds have been funded.

“We hope this important work will encourage individuals from diverse backgrounds to make their donation decision and share it with their families and that ultimately will see an increase in the number of black, Asian, mixed race and minority ethnic donors.

“The work of community-led organisations is vital to delivering the facts through trusted messengers. They can help people understand that unless more people from their community come forward as organ donors, patients from their own community will continue to face unequal access to transplants.

“The BAME Community Investment Scheme is an important part of the wider activity and campaign to educate and engage these communities.

“NBTA will continue to work collaboratively with NHS Blood and Transplant and others to develop the community model so that it reaches a wider section of black, Asian and minority ethnic groups across the country in the future.”