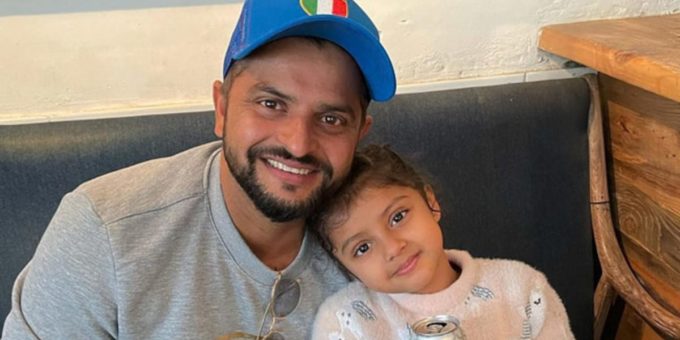 When it comes to sharing snippets of his gastronomic adventures on social media, former India cricketer Suresh Raina is second to none. He often shares glimpses of his personal life on Instagram, and a major part of it revolves around food. For the uninitiated, Raina also enjoys cooking up a storm and on many occasions, we have seen his wife Priyanka and daughter Gracia playing sous chefs. He is also someone who likes eating out once in a while. Yet again, he has left no stone unturned to give us major food goals.

The sportsman seemed to have had a gala time at a five-star hotel in Delhi on Saturday night and shared some glimpses on Instagram Stories.

In the first one, we could see sushi arranged on different platters. Indeed, sushi with different kinds of ingredients and toppings; would have made him happy to the core. The next one was a picture of him, his wife Priyanka and a couple of friends devouring what looked like a Mughlai meal. Not to miss out on the showstopper — a giant naan at the centre of the table. There were also some curries and salad on the side.

Suresh Raina is a self-confessed foodie. Oh, we have told you that already. Let us take you back to this Reels on Instagram where we could see him looking out for mouth-watering recipes while sitting on a couch and even inside a car. His caption stated, “All I think about is food”. Read more about it here.

Suresh Raina often plays chef at home and it wouldn’t be wrong to say that his daughter shares the same love for food. On one occasion, he shared a video clip that was originally posted by his wife. From the video, we could see him busy cooking in a ‘handi’ while his daughter Gracia was engrossed in making pizza in the oven. The caption said, “Family that cooks together, stays together. Hubby’s obsession with handi cooking & Gracia’s obsession with pizza. Rio is doing what he does the best… being the cutest.” To find out more about the family bonding over food, click here.

When you sing you must think to yourself you will sing better than your guru: Advice Lata Mangeshkar got from her father

Karishma Tanna wedding: Actor made for a gorgeous bride in a soft pink lehenga; see pics

Ginger water for weight loss: How this magical concoction can help you lose weight
2019-12-12

Alberta is moving to dissolve the electricity Balancing Pool. Here’s why that matters to you
2022-04-14