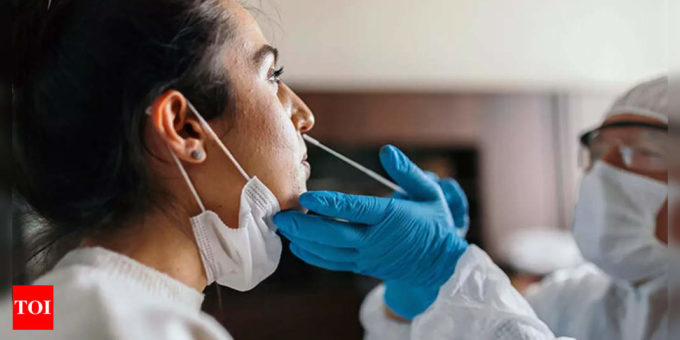 PARIS: In her pharmacy in central Paris, Mireille Grand points to near-empty shelves where she would normally have Covid-19 tests stocked up. Only five tests remain.
“That’s all that’s left!” she said. “This is due to a sharp increase of many, many Covid contact cases. We had to do a lot of tests.”
Across France, pharmacies say they have run short of Covid tests as cases rise and people scramble to make sure they do not risk contaminating loved ones as they meet up in the holiday season.
Nearly 5.3 million PCR and antigen tests were carried out from Nov. 9 to Dec. 5, official data shows, the highest number in months and a 31% increase on the previous week, which itself was about 38% higher than the week before.
In the last week of October, only about 2 million tests were carried out, but the number of tests has increased steadily since then.
“There have been lots of people coming to take the tests to make sure they’re not infected with Covid-19 for gatherings, to go see their families,” pharmacist Grand said.
She has ordered new tests but the delivery is taking much longer than usual, she said, as pharmacies across the country and beyond jostle to obtain more tests. She would normally have a stock of 30 boxes of 25 tests each.
France is seeing an increase in cases, and in Covid-19 hospitalisations, even if, thanks to one of Europe’s highest vaccination rates, there has been less impact on hospital numbers than in previous waves of the pandemic.
Meanwhile, Health Minister Olivier Veran said that 12.5 million people in France had received a Covid-19 vaccine booster shot, with the number set to reach 20 million by Christmas.
That comes with yet more work for pharmacies, which have been encouraged by health authorities to remain open on Sundays to get more people vaccinated.