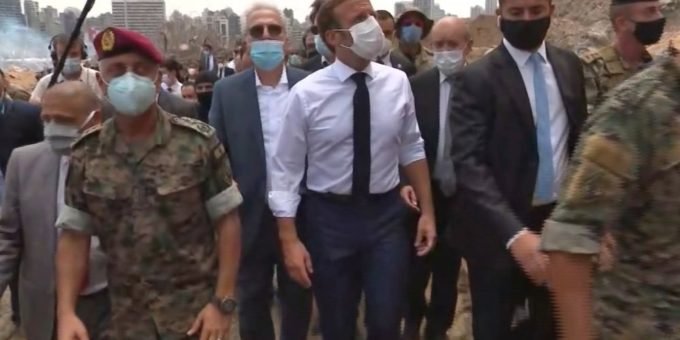 BEIRUT: An army of volunteering civilians flocked to the residential areas damaged by the huge explosion that rocked Beirut on Tuesday evening. They have been holding brooms and shovels for two days, while wearing masks and gloves and cleaning debris and glass shards from inside the homes and outside the shops.

The Martyrs Square in downtown Beirut turned into a volunteer center; Tents were built and filled with water bottles, bread, and food items that were donated in order to be distributed to the displaced people.

Most young women bought their own brooms and received gloves from the Beirut municipality to protect them from wounds that can be caused by glass fragments, while other volunteers came without any protective gear and held shovels to remove rubble, saying that they are not afraid of injury.

Social media platforms were behind some people’s enthusiasm to get on the ground, whereas others’ zeal motivated them to come to the aid automatically.

Ziad Haidar from the Lebanese Spotlight organization said: “Similarly to other volunteers, we are school students between the ages of 16 and 18. We participate in cleaning beaches usually, but today, people need our help. All we see is destruction, especially in downtown Beirut, Gemmayze and Mar Mikhael”.

“We are college students from Beirut who gathered, went to the Beirut municipality and received gloves. We had bought brooms at our expense. Most affected people are poor and unable to fix anything broken”, said Ghida.

Jad and Anas, students at the American University of Beirut (AUB), went to Gemmayze to contribute to the aid. They said that they are not members of any organization, but felt the need to take action and not only watch television. 21-year-old Anas said: “I started helping at my parents’ house, then my neighbors’. We live relatively far from the explosion site, but we were affected by the damage. In my neighborhood, I used my car to transport injured people to the hospital. The only logical thing I could think of is to offer help. People told me about how they lost a sister or a daughter, and how some people are still lost and not found in hospitals. That truly affected me”.

22-year-old Jad said that he was seeking immigration, but changed his mind and decided to stay in the country after the explosion at Beirut’s port: “We have not witnessed any wars, and when the 2006 aggression happened, we were kids”.

“My parents lived through many wars, and yesterday, they were shivering and counting on me to rescue them after the explosion. That affected me a lot. I turn to them to care for me usually, but yesterday, it was the other way around. I used to hear war stories from my grandfather and father, but today, I am living that experience, not knowing whether I will ever be able to tell my children about it. My grandfather had told me that war is over and behind us, but today, it looks like we are heading towards it once again. Where is the happy ending? I do not want to tell my children that we left Lebanon because it became unlivable”, added Anas.

Sabil spoke on behalf of a group of young women who came from Tripoli: “We are from the Humanities and Social Science Organization. We normally help people in Tripoli, but this is our capital Beirut, and it is our duty to help it in its disaster. We know the beautiful buildings in Beirut, but they are destroyed today, and people need us. Our parents have accompanied us to Beirut to donate blood in hospitals”.

She added: “We worked on removing debris from inside a lot of homes that were left without any furniture, and people are unable to compensate for their losses, but if we, young people, continue our volunteer work, we might rebuild the walls that were destroyed. We want to give people hope”.

Nayla Mouawad, a volunteer college student said: “My female friends and I wore masks and decided to take to the streets. People need us and we must help each other”.

Yvon Azar said: “The streets are crowded because people are coming to Beirut to help. This is humanitarian work we should be proud of”.

Bachir Jabbour, Tony Houry and Joe Semaan came from Bekfaya to Beirut because they were no longer able to watch the events on television. They decided to help “because mourning the homeland does not lead anywhere”.
“This is our country and we will not leave. Let the people who hurt it leave!”

Scenes about young people’s enthusiasm to help affected people were preceded by stories about young men and women who turned into heroes on social media platforms. 25-year-old Sahar Fares is the first female paramedic of Beirut Fire Brigade who was motivated to help her friends put out the fire at the port, which led to the huge explosion that happened seconds later. Her body was later found, and she was buried on Thursday, amid the applause of all the security agencies, out of respect for her patriotism and humanism.

The Order of Nurses mourned five nurses who passed away in the Beirut’s port explosion on Tuesday, while in the line of duty at hospitals and centers that were destroyed by the blast. The nurses are Lina Abou Hamdan, Jessy Kahwaji Daoud, Jessica Bazdarjian, Mireille Jermanos and Jacqueline Jibrin.

In contrast, people on social media platforms shared the photo of nurse Pamela Zeinoun holding three newborns and trying to keep them warm after the Al Roum Hospital where she works was extensively damaged.